November is American Indian and Alaska Native Heritage Month. The month celebrates rich and diverse cultures, traditions, and acknowledges the important contributions of Native people. It’s also an opportune time to educate the general public about tribes, to raise awareness about the unique challenges Native people have faced historically and in the present, and how tribal citizens have worked to conquer these challenges.

This annual period provides a platform for Native people to share their culture, traditions, music, crafts, dance, and ways of life and opens the opportunity to express to their community, local and state officials concerns and solutions for building bridges of understanding and friendship in their local area.

America needs to remember Native peoples have participated in every major U.S. military encounter from the Revolutionary War to today’s conflicts in the Middle East, serving at a higher rate in proportion to their population than any other ethnic group.

At https://bookstore.gpo.gov is a fascinating fourteen volume collection from the Smithsonian Institution’s Handbook of North American Indians series, the ultimate resource for Native American history across various regions of North America. The set summarizes of what’s known about the prehistory, history, and cultures of the aboriginal peoples of North America north of the urban civilizations of central Mexico.

On May 13 1983, President Ronald Regan signed a proclamation declaring it “American Indian Day” in honor of the Native American people who first settled this land.

The proclamation states, “In recognition of the unique status and contribution of the American Indian peoples to our Nation, the Congress of the United States, by House Joint Resolution 459 (P.L. 97 – 445), has authorized and requested the President to issue a proclamation designating May 13, 1983 as `American Indian Day.’”

For the entirety of the existence of our country, there have been treaties between the Native American tribes and our Government, but in January of 1983, Reagan’s administration set forth to strengthen the ties and to increase the sovereignty of the individual tribes.

Since then, each president has proclaimed November as “American Indian Heritage Month” and continued the honor for the first settlers of this land.

The U.S. Government Publishing Office (GPO) makes these proclamations, including the original 1983 Proclamation 5049, available in digital files through govinfo. As the GPO continues its efforts to digitize vital Government documents, the history of our Nation and the story of the continued collaboration with the sovereign Native American tribes will be documented and provided to the public for free. It’s all part of our mission in Keeping America Informed.

The Catalog of U.S. Government Publications (CGP) also has several of the ongoing acts and resolutions that Congress has passed through the years to assist the Native American tribes such as:

If you’re interested in learning more about the History of the American Indian tribes, visit the GPO Bookstore and pick up a volume of the Smithsonian’s Handbook of North American Indians series. It is the ultimate resource for Native American history across various regions of North America. The multi-volume hardcover reference set is intended to give an encyclopedic summary of what is known about the prehistory, history, and cultures of the aboriginal peoples of North America north of the urban civilizations of central Mexico.

About the author: Blogger contributor Scott Pauley is a Writer and Editor in GPO’s Library Services and Content Management office.

In 1990, President George H. W. Bush proclaimed November as “National American Indian Heritage Month,” as requested in Public Law 101-343. Since then, proclamations and legislation have been passed to recognize the history and culture of Native American Indian and Alaskan Native tribes during the month of November. You can read many of the past proclamations and legislation on GPO’s Federal Digital System (FDsys).

There are many documents related to designation of November as a celebration of Native American heritage. In addition, many documents about the celebration are available in Federal depository libraries located nationwide or online through GPO’s Catalog of U.S. Government Publications.

The effort to recognize and celebrate American Indian Heritage at a national level began a century ago. Dr. Arthur Caswell Parker, director of the Rochester Museum in New York and founder of American Indian rights organizations, persuaded the Boy Scouts of America to commemorate a day for “First Americans” in 1912. 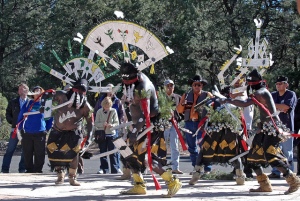 Several declarations by American Indian Groups have designated a day in May as well as September for commemorating Native Americans. Additional historical information is available on the U.S. Department of the Interior Indian Affairs Web Site. The site also provides a list of Congressional Resolutions and Presidential Proclamations. Many of those are available through FDsys, or in the collections at Federal depository libraries. The Library of Congress also has a Web site with information about Native American Heritage Month.

Federal Observance of an official day or week to celebrate Native culture began in 1976 with a Congressional Resolution authorizing President Ford to declare on October 8, “Native American Awareness Week.” Every year thereafter, a proclamation has been made to celebrate a day or month in honor of American Indians. According to a Library of Congress information page about the history, it began in 1986 with Public Law 99-471 and President Reagan’s Proclamation 5577 declaring November 23-30, 1986 as “American Indian Week.” In 1992, Public Law 102-188 declared the entire year of 1992 as “Year of the American Indian.”

President Obama made the 2014 proclamation on October 31. You can check the White House Web Site for other Presidential Proclamations. Historical proclamations are included in publications such as the Public Papers of the Presidents of the United States and the U.S. Statutes at Large. These can also be accessed in Federal depository libraries nationwide.

Many States in the U.S. also celebrate a Native American Day.

Recently the California State Legislature proclaimed the Fourth Friday in September as Native American Day. American Indian Day has been celebrated in Tennessee since 1994.

Other annual events occur throughout the year, such as the annual Native American Heritage Days held in Grand Canyon National Park. The twenty-first annual event was held this year from August 7-8, 2014

Whether celebrating a day, month or year, you can take any opportunity to learn more about the history and culture of the indigenous peoples of North America.

The National Library of Medicine recently created the exhibition Native Voices: Native People’s Concepts of Health & Illness. Visitors can see the exhibit in the rotunda gallery of the National Library of Medicine, or visit the traveling exhibition. The Exhibition opened in Honolulu Hawaii on July 18th, and is currently in Sulphur, Oklahoma until October 24, 2014. For those unable to visit in person, the Web site includes videos, timelines, and resources about the exhibition and content.

Image courtesy of The University of Iowa (Digital Library)

The National Archives contains a wealth of records relating to American Indians from about 1774 through the 1990s. Their Web site provides a helpful research guide for accessing these collections. The U.S. Department of Housing and Urban Development has created an informative guide on Native American Heritage through the Indian Housing’s Office of Native American Programs (ONAP). The U.S. Department of Defense also has a detailed Web guide created for the 2001 American Indian Heritage Month.

The Smithsonian National Museum of the American Indian is a valuable educational resource visitors to Washington, D.C. can explore. Those unable to visit in person can explore some of the collections online.

There are also several books and series published by Federal agencies and available from the Government Printing Office bookstore to learn more about Native cultures, history, and recent events:

HOW DO I OBTAIN THESE PUBLICATIONS?

In addition to clicking on the links in the article above to find the publications, you may find these publications from the following:

Shop Online Anytime: You can buy these and other print publications (with FREE Standard Shipping worldwide) from the U.S. Government Online Bookstore Web site at http://bookstore.gpo.gov:

About the author: Cathy Wagner is an Outreach Librarian with the Outreach & Support team in the Library Services & Content Management (LSCM) unit at the Government Printing Office.