There are 267 world entities. Each one has a history, people, government, and economy. The Central Intelligence Agency (CIA) aims to summarize that information in just a few pages. The World Factbook, prepared by the CIA using information from a half-dozen cabinet-level agencies, profiles basic intelligence on all areas of the world. GPO makes available the latest edition of the U.S. government’s complete geographical handbook.

This U.S. has been involved in basic intelligence gathering since the days of George Washington. As for the World Factbook, its beginnings predate the establishment of the CIA itself. During WWII, military decision-makers lacked detailed and coordinated information. So, they initiated a joint effort to collect and publish strategic intelligence. That information remained classified for nearly two decades.  According to the book’s own brief history, “the first classified Factbook was published in 1962, and the first unclassified version was published in June 1971.” Since 1975, GPO has made the almanac-style resource available to the public writ large.

The World Factbook is an encyclopedic listing of each country’s society, geography, energy, communications, transportation, military, and transnational issues. It includes full-color maps of the major world regions including physical geography, political capitals, and world oceans with major shipping lanes, ports and checkpoints.

Here are a few geography facts that just may help you win at trivia night: 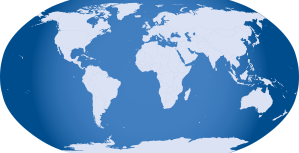 The CIA World Factbook covers Afghanistan to Zimbabwe and every country in between.

The Factbook’s current and actionable intelligence isn’t just for national-level policymakers. It’s a reference resource for everyone. The CIA World Factbook is “the indispensable source for basic intelligence,” the sort of world knowledge that can have a significant impact on people’s lives.

I’ve got the Whole World in my Hands…

You know you just sang the title of this blog. Now that I have your attention, let me tell you how you can have the whole world in your hands. Pick up the latest edition of The World Factbook 2013-14, currently available from the GPO Bookstore. Jam-packed with a plethora of information, it’s a one-stop reference for everyone from the youngster who has a geography project to a college student researching the economic climate in other countries.

The World Factbook is prepared by the Central Intelligence Agency (CIA)

For those of you who are new to the World Factbook, here are a few key facts:

The World Factbook 2013-14 provides the latest statistical facts for 267 countries and regions around world. Each entry begins with a small black and white map of the country or territory. It goes on to give a brief background introduction, the geography, people and society, government, economy, energy, communications, transportation, military, and transnational issues. The publication also contains maps that present the physical features and political boundaries of each nation, as well as, the standard times zones of the world and the official flag of each country.

This image of the Physical Map of the World is one of several maps included in the World Factbook.

The World Factbook is filled many interesting facts. For instance, did you know that Russia and Japan have not formally ended World War II? According to the World Factbook, “the sovereignty dispute over the islands of, Etorofu, Kunashiri and Shikotan and the Habomai group, known in Japan as the ‘Northern Territories’ and in Russia as the ‘Southern Kuril islands,’ occupied by the Soviet Union in 1945, now administered by Russia and claimed by Japan, remains the primary sticking point to signing a peace treaty formally ending World War II hostilities.”

Other interesting facts, as well as recent updates to various categories and maps can all be found in the World Factbook 2013-14.

Take a journey into the Factbook to learn what you didn’t know about the world we live in.

Shop Online Anytime: You can buy these publications (with FREE Standard Shipping worldwide) from the U.S. Government Online Bookstore website at http://bookstore.gpo.gov:

Shop our Retail Store:Buy a copy of any print editions from this collection at GPO’s retail bookstore at 710 North Capitol Street NW, Washington, DC 20401, open Monday–Friday, 9 a.m. to 4 p.m., except Federal holidays, Call (202) 512-0132 for information or to arrange in-store pick-up.

About the author: Faith Johnson is an Outreach and Support Librarian for the U.S. Government Printing Office’s Library Services & Content Management division.

Browsing Through the World Factbook

The big, comprehensive, and recurring reference work is a classic Government publication type. One of my favorites of this kind is the CIA’s annual World Factbook. Since 1980, this massive volume has been a mainstay for anyone interested in the various countries of the world.

Although the Factbook has all kinds of information about a country’s geography, people, government, economy, population, communications, transportation, and military, plus both inset and foldout maps, the section that always draws my attention is “Transnational Issues.” If, as Thomas Carlyle said, “Happy the people whose annals are blank in history,” then happy is the nation whose World Factbook profile has nothing under that heading. The subheads include “Disputes – International,” “Refugees and internally displaced persons,” “Illicit drugs,” and “Trafficking in persons.” It’s amazing how few countries meet this definition of happiness. Of course, many underdeveloped or newly formed nations, like Chad and Moldova, suffer from these ills, but so do Denmark (disputes with Iceland and the UK over the Faeroe Islands continental shelf; Faeroese interest in full independence), New Zealand (territorial claim in Antarctica; amphetamine use), and Portugal (“Portugal does not recognize Spanish sovereignty over the territory of Olivenza based on a difference of interpretation of the 1815 Congress of Vienna and the 1820 treaty of Badajoz”; gateway for the international drug traffic).

Of course, a peaceful disagreement between Spain and Portugal is a long way from the simmering armed conflict between Eritrea and Ethiopia, but boundary disputes and international crime are, unhappily, common currency in the world – and what better place to find out about them, and a host of other developments, than the World Factbook? The CIA maintains the Factbook here, or you can get your own copy here.