I’ve got the Whole World in my Hands… 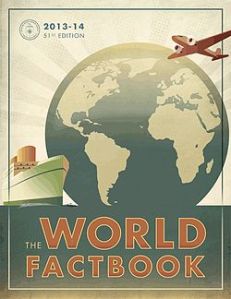 You know you just sang the title of this blog. Now that I have your attention, let me tell you how you can have the whole world in your hands. Pick up the latest edition of The World Factbook 2013-14, currently available from the GPO Bookstore. Jam-packed with a plethora of information, it’s a one-stop reference for everyone from the youngster who has a geography project to a college student researching the economic climate in other countries.

The World Factbook is prepared by the Central Intelligence Agency (CIA)

For those of you who are new to the World Factbook, here are a few key facts:

The World Factbook 2013-14 provides the latest statistical facts for 267 countries and regions around world. Each entry begins with a small black and white map of the country or territory. It goes on to give a brief background introduction, the geography, people and society, government, economy, energy, communications, transportation, military, and transnational issues. The publication also contains maps that present the physical features and political boundaries of each nation, as well as, the standard times zones of the world and the official flag of each country. 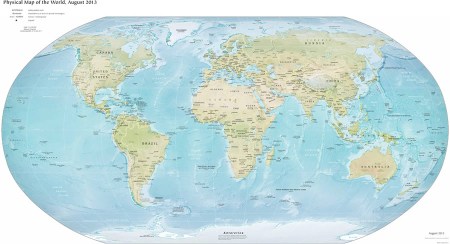 This image of the Physical Map of the World is one of several maps included in the World Factbook.

The World Factbook is filled many interesting facts. For instance, did you know that Russia and Japan have not formally ended World War II? According to the World Factbook, “the sovereignty dispute over the islands of, Etorofu, Kunashiri and Shikotan and the Habomai group, known in Japan as the ‘Northern Territories’ and in Russia as the ‘Southern Kuril islands,’ occupied by the Soviet Union in 1945, now administered by Russia and claimed by Japan, remains the primary sticking point to signing a peace treaty formally ending World War II hostilities.”

Other interesting facts, as well as recent updates to various categories and maps can all be found in the World Factbook 2013-14.

Take a journey into the Factbook to learn what you didn’t know about the world we live in.

Shop Online Anytime: You can buy these publications (with FREE Standard Shipping worldwide) from the U.S. Government Online Bookstore website at http://bookstore.gpo.gov:

Shop our Retail Store:Buy a copy of any print editions from this collection at GPO’s retail bookstore at 710 North Capitol Street NW, Washington, DC 20401, open Monday–Friday, 9 a.m. to 4 p.m., except Federal holidays, Call (202) 512-0132 for information or to arrange in-store pick-up.

About the author: Faith Johnson is an Outreach and Support Librarian for the U.S. Government Printing Office’s Library Services & Content Management division.

This entry was posted on Tuesday, July 15th, 2014 at 3:31 pm and is filed under Central Intelligence Agency (CIA), International, Libraries. You can follow any responses to this entry through the RSS 2.0 feed. You can leave a response, or trackback from your own site.