Gettysburg, Manassas, and Antietam are famous Civil War battles remembered for President Lincoln’s address, the turning point of the war, and the bloodiest battle of the war. They are also battles that took place in states surrounding Washington, DC – within 100 miles of the nation’s capital. This week marks the 150th anniversary of the only and relatively unknown battle that took place in Washington, DC, the Battle of Fort Stevens.

A Historic Resources Study: The Civil War Defenses of Washington by the Department of Interior’s National Park Service follows the history of efforts to defend Washington, DC from the city’s conception in the 1790s to the Civil War and the Battle of Fort Stevens. This publication is very descriptive painting a clear picture of what Washington, DC was like during the Civil War. The Union constructed a fortification system to protect Washington, DC that by the end of the war consisted of 68 enclosed forts and batteries, emplacements for 1,120 guns, and 20 miles of rifle-trenches. Because the city was the capital and the location of war departments and bureaus it had the largest collection of supplies, equipment, and materials. In the Foggy Bottom area where the Kennedy Center, George Washington University, and the Department of State currently sit, there was a depot of 30,000 horses and mules and the Washington Monument grounds housed an Army cattle-slaughtering yard. 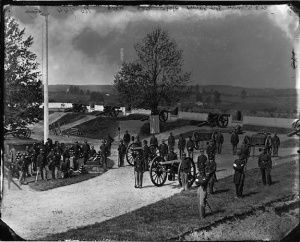 The Battle of Fort Stevens is the grand finale of the publication. After establishing the condition and role of the Washington, DC during the war, the book goes into step-by-step detail of the battle. Here is my perceived synopsis of the Battle of Fort Stevens: General Robert E. Lee of the Confederate army gave orders to Lieutenant General Jubal Early to threaten Washington, DC, which had remained largely untouched during the war. Early led his troops through Virginia and Maryland, taking part in different skirmishes along the way. On July 9 at the Battle of Monocacy near present-day Frederick, Maryland, Early defeated the Union army, thereby opening up the route to Washington, DC. The Battle of Monocacy temporarily stalled Early, giving General Ulysses Grant more time to send reinforcement troops to defend the capital – ultimately derailing Early’s efforts. The Battle of Fort Stevens started on July 11 and ended with Early withdrawing his troops by July 13. The Confederate troops moved towards the Capitol along Georgetown Pike and Rockville Pike culminating in the Battle of Fort Stevens, which took place with the Capitol dome in sight – six miles away – on what was mostly open farm area around present-day Georgia Avenue near Rock Creek Park. The reinforcements sent by Grant and reports suggesting more Union troops were coming caused Early to retreat and end his pursuit of the city.

GPO’s early history is intertwined with the Civil War. One of GPO’s most significant print jobs was the preliminary version of the Emancipation Proclamation produced in September 1862. Aside from production work done by the agency as part of the war effort, some GPO employees were part of the Interior Department Regiment organized to protect the city. With the threat of General Early closing in on Washington, employees were called on to defend the city but not needed when the reinforcement troops sent by General Grant arrived.

During the 150th anniversary of the Civil War, think beyond the famous battles of the war and remember the skirmishes and other important battles like the Battle of Fort Stevens that may be unknown but are just as important.

Shop Online Anytime: You can buy these and other publications (with FREE Standard Shipping worldwide) from the U.S. Government Online Bookstore website at http://bookstore.gpo.gov:

About the author: Our guest blogger is Emma Wojtowicz, Public Relations Specialist in GPO’s Office of Public Affairs.

This entry was posted on Thursday, July 10th, 2014 at 11:04 am and is filed under Center of Military History, Civil War, Government Printing Office (GPO), Military History, National Park Service. You can follow any responses to this entry through the RSS 2.0 feed. You can leave a response, or trackback from your own site.