Light Up Your Independence Day with These Historic Posters 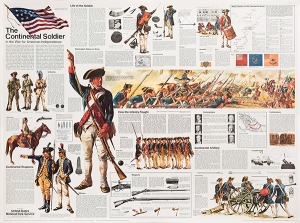 The Fourth of July is easily one of the most anticipated holidays in America. It’s part of what makes summertime so darn sweet. And who can blame us? What’s more fun than a day of bobbing up and down over our nation’s shining seas while the smell of saltwater and sunscreen lingers in the air? It’s a day when messy watermelon hands are welcomed and our tummies are happily full from hamburgers and hot dogs. And no doubt, nothing beats the feeling that overwhelms us as each firework shoots into the warm night air, lights up in a blinding sparkle, and gradually drips away like a chandelier in the sky.

But with all the soirees and excitement of the Fourth, it’s easy to go the whole day without really thinking twice about why we’re doing all these fun activities. So this Independence Day, order posters from GPO’s Bookstore that will help remind you of the meaning and origin of this important day. The poster Continental Soldier in the War for American Independence gives detailed information about how the infantry fought, who the army commanders were, and the nearly impossible conditions American soldiers endured. Philadelphia, 1776 offers detailed information about Philadelphia, including its intellectual awakening of the Enlightenment, its budding architecture, and its economic prosperity, during the Revolutionary War.

Give your July 4th party that little extra dash of patriotism with these two posters. You and your guests may feel just a little more grateful for your freedom when you do. And while you’re at it, don’t forget to order one for the kid in your life to hang in their room.

“Taxation without representation”; the battle cry in America’s Thirteen Colonies when forced to pay taxes to England’s King George III despite having no representation in the British Parliament. As dissatisfaction grew, British troops were sent to quell the growing movement toward rebellion. Repeated attempts by Colonists to resolve the crisis without military conflict proved fruitless.

How do you celebrate our freedom? With just hot dogs and burgers and fireworks? You might want to consider the hundreds of thousands of Americans now serving overseas to protect our way of life while we relax in the yard or at the beach this holiday weekend.

Get involved as they are. Take a step forward in understanding how America came to be, or read how our ever-vigilant military leaders give advice and counsel to our nation’s leaders. Reading to open the eyes of all Americans to the challenges we must face as a nation bound together as one.

Declaration of Independence and Constitution of the United States

A pocket-size booklet containing the complete text of these two core documents of American democracy: the Declaration of Independence and Constitution of the United States.

The Citizen’s Almanac: Fundamental Documents, Symbols, and Anthems of the United States U.S.

This pro-Americana booklet has been primarily designed for naturalized citizens as they enter into citizenship life within the United States of America.  The Citizen’s Almanac contains information on the history, people, and events that have brought us where we are today as a beacon of hope and freedom to the world. The contents of this booklet will serve as a constant reminder of the important rights and responsibilities immigrants will now have as a U.S. citizen.

The new administration takes office in a time of great complexity. Our new President faces a national security environment shaped by strong currents: globalization; the proliferation of new, poor, and weak states, as well as non-state actors; an enduring landscape of violent extremist organizations; slow economic growth; the rise of China and a revanchist Russia; a collapsing Middle East; and a domestic politics wracked by division and mistrust. While in absolute terms the Nation and the world are safer than in the last century, today the United States finds itself almost on a permanent war footing, engaged in military operations around the world.