Commemorate the Anniversary of Arlington National Cemetery through Government Documents 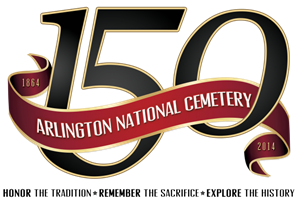 This year marks the 150th anniversary of the designation of Arlington National Cemetery. On May 13, 1864, the body of Private William Henry Christman of Pennsylvania was laid to rest on the grounds of Arlington House, the former home of Gen. Robert E. Lee until the Civil War. Private Christman was the first soldier laid to rest at Arlington National Cemetery, one month prior to its official establishment as a military cemetery. The first of many events to be held this summer commemorating this important anniversary, began on May 13, 2014 with the laying of a wreath at Private Christman’s grave. Special Guided Tours are also planned, through the months of May and June. The events conclude with a laying of a wreath at the Tomb of the Unknown Soldier on June 16th.

A wreath is placed at the grave of Army Private William Christman, the first person laid to rest at Arlington National Cemetery. Image source: http://www.dcmilitary.com

Arlington House and the development of Arlington National Cemetery

The National Park Service (NPS) has published several publications regarding the remarkable history of Arlington House, including the following publications, which are currently available from the U.S. Government Bookstore:

Arlington National Cemetery holds about 27 funerals each week. There are several House Committee Reports regarding veterans’ eligibility for burial in Arlington. H.R. 3211 of the 105th Congress, as well as H.R. 3423 from the 107th Congress amended Title 38 of the U.S. Code to modify eligibility of burial in Arlington National Cemetery. You can access hearings, as well as the legislative history for H.R. 3423 and other bills online. You can also visit a Federal depository library for older reports concerning burials, such as a 1921 report before a subcommittee on the Expenses of burial in Arlington Cemetery of an unknown member of the Expeditionary Forces. You can also browse the volumes of “The war of the rebellion: a compilation of the official records of the Union and Confederate armies” for any records of the history of Arlington House and the appropriation of the land by the Federal government after the war. The volumes are available at many Federal depository libraries.

There are many memorials at Arlington National Cemetery commemorating wars, notable military figures, presidents, and service men and women. If you visit a Federal depository library you could check out a copy of “In Remembrance of a Sailor: a shrine to America’s heroes”, a 1990 publication from the U.S. Navy Department. Information about other memorials in the cemetery can be found on the Arlington Cemetery website.

The Tomb of the Unknown Soldier

President Dwight D. Eisenhower places a wreath at the Tomb of the Unknown Soldier of World War I during interment ceremonies for the Unknown Servicemen of World War II and the Korean Conflict, at Arlington National Cemetery. Image source: Old Guard

The Tomb of the Unknown Soldier was approved by Congress on March 4, 1921. Details of the act can be found in the Congressional Record from that period. You can visit a Federal depository library to access historic copies of the Congressional Record and view the enabling legislation for the Tomb of the Unknowns. The remains of soldiers from World War I, World War II, and the Korean War lay in state and are honored by The Old Guard. In 1984, the remains of an unknown Vietnam War soldier were interred in the Tomb of the Unknown. A document about this soldier, “The Unknown Serviceman of the Vietnam War Era” was created by the U.S. Army Center of Military History. You can read more about it at a Federal depository library, or online from the HathiTrust. Pictures of the Tomb of the Unknowns can be found on the Old Guard Pinterest Board.

If you’re not in the Washington, DC area to participate in any of the events mentioned in this blog, curl up with these documents and immerse yourself in the history and stories of the men and women who fought for our country and were laid to rest on the grounds of the National Cemetery.

How can I get these publications about the history of Arlington House and Arlington National Cemetery?

Shop Online Anytime: You can buy these and other publications (with FREE Standard Shipping worldwide) from the U.S. Government Online Bookstore website at http://bookstore.gpo.gov:

About the author: Cathy Wagner is an outreach librarian with the Education & Outreach team in the Library Services & Content Management (LSCM) division at the Government Printing Office.