This 712-page Executive Summary of the full report, which includes the Committee’s findings and conclusions of CIA’s Detention and Interrogation Program, is divided into the following seven key topics:

The report also includes three appendices covering the terms of reference, the CIA’s list of detainees from 2002-2008, and an example of inaccurate testimony to the committee from April 12, 2007.

Although the full report provides substantially more detail than what is included in the Executive Summary on the CIA’s justification and defense of its interrogation program and use of its “enhanced interrogation techniques,” this basic review provides a snapshot of what you will learn upon reading the executive summary.

To learn more about the ClA’s Detention and Interrogation Program, you can purchase the report through the GPO Online Bookstore.

How do I obtain a copy of this Senate Intelligence Committee Study of the Central Intelligence Agency’s Detention and Interrogation Program?

In addition to clicking on the link in the article above to find the report, you may find this report from the following:

Shop Online Anytime: You can buy this report and other publications (with FREE Standard Shipping worldwide) from the U.S. Government Online Bookstore website at http://bookstore.gpo.gov:

There are certain moments and events that are etched in our national consciousness. Ask any American who was alive in the 60’s where he or she was when John F. Kennedy or Martin Luther King was assassinated and you will hear a stirring personal story. For our generation, it was September 11, 2001.

Image: September 11 Decade of Remembrance logo with World Trade Center Twin Towers surrounded by a figure representing the Pentagon. Created by David McKenzie with the Government Printing Office for the U.S. Government Bookstore.

I was right across from the Twin Towers twelve years ago today, getting ready to board a ferry for my daily commute from New Jersey across the Hudson River into Manhattan, when I saw the second plane hit the World Trade Center right across from me. So, too, I cried with a group of strangers as we stood on the ferry platform and watched in horror as the first tower fall, saw the dust cloud rise and felt the earth—and the world—tremble.

America and Americans have changed since that day… twelve years ago today. We have since heard stirring stories of heroes and sacrifice, and learned many grim lessons that are still affecting both policy and people today.

Many of these stories of heroism, missed opportunities, and resulting actions have been painstakingly and faithfully chronicled by a wide array of Federal agencies, ensuring the sacrifices and lessons are not forgotten.

Responding to the Tragedies

Both in New York and the Pentagon in Washington, DC, we saw how first responders and medical personnel rushed to save lives. These excellent publications tell the stories of the heroes from that day:

The single must-read for every American about September 11 is the official version of The 9/11 Commission Report: Final Report of the National Commission on Terrorist Attacks Upon the United States. This publication lists the findings of the National 9/11 Commission, listing all the painful errors made leading up to the terrorist attacks and outlining specific recommendations for international, national, state and local changes in policy and procedures that the panel of experts felt needed to be implemented to ensure a similar attack never happened again. This seminal publication has served to inform all subsequent policies and legislation since 9/11. It is available in print or as an eBook. 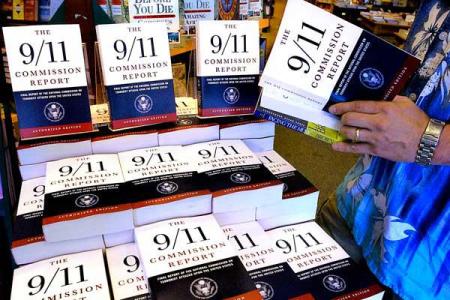 Additional insights into the causes of and responses to terrorism can be gleaned from Terrorism Research and Analysis Project (TRAP): A Collection of Research Ideas, Thoughts, and Perspectives, V. 1. This publication provides the findings from the post-9/11 FBI Terrorism Research and Analysis Project (TRAP) Symposium. TRAP is a leading research consortium made up of international/domestic academics and law enforcement officers, and is a working group sponsored by the FBI’s Behavioral Science Unit. In it, these counter-terrorism experts provide a better understanding of the causes of terrorist activity and possible government response tactics to mitigate terrorist actions.

As we watch the new World Trade Center going up in New York, we can be assured that builders are incorporating architectural and construction lessons learned from the World Trade Center Building Performance Study: Data Collection, Preliminary Observations, and Recommendations.

United States Congressional Serial Set, Serial No. 14924, House Report No. 724, 9/11 Recommendations Implementation Act, Pts. 1-6 outlines the specific legislative changes enacted by Congress, providing both background and justifications for them along with attribution.

Defending the Homeland since 9/11

In a similar vein, Rogue Wave: The U.S. Coast Guard on and After 9/11 chronicles the involvement of the U.S. Coast Guard on that fateful day and the evolving role in national and world security since.  Part of the Coast Guard 9/11 response is told in this touching video about the boatlift to evacuate people from lower Manhattan is told in a video narrated by Tom Hanks entitled: “BOATLIFT, An Untold Tale of 9/11 Resilience.”

Click on the image above or this link to view the “Boatlift” video.

The upcoming U.S. Army War College Guide to National Security Issues, Volume 2: National Security Policy and Strategy provides a summarized look at the national security curriculum now taught to our nation’s top military and civilian leaders by the U.S. Army War College. Revised with the lessons learned from the years since 9/11, this publication includes a chapter on ”Securing America From Attack: The Defense Department’s Evolving Role After 9/11.”

How can I obtain these Federal 9/11 publications?

It’s hard to believe that the 10th anniversary of the 9/11 attacks is almost here. It was one of those events, like Pearl Harbor or the Kennedy assassination, which remains in the memory with startling clarity. From where I was working in the Government Printing Office (GPO), we could see the column of smoke from the strike on the Pentagon. Later, after Federal Government facilities in the DC area closed down, I walked from GPO to the Smithsonian’s National Museum of American History (I still remember a woman telling a Smithsonian guard that she had seen someone on the building’s roof – and who could tell what that meant in a world spinning out of control?) to meet my wife, who by some miracle got into the District and picked me up. On the way home, we drove past the Pentagon. It looked like the set of a disaster movie, the windows in the stricken area appearing as little orange rectangles of flame in a floodtide of black smoke. Several years later, after a reconstruction that left no sign of the horrific damage, I was in the Pentagon on business and our escort mentioned that we were walking in the corridor through which Flight 77 smashed – an awesome and saddening moment.

Several years ago, the Office of the Secretary of Defense published what must be considered the definitive story of September 11, 2001 at the Pentagon. Pentagon 9/11 is packed with eyewitness accounts of the strike, the fires, the deaths, and the heroism of rescuers in the face of almost unimaginable disaster. It’s chilling to read eyewitness descriptions of Flight 77 flying into the Pentagon (more than 1,300 interviews went into the development of this book), and uplifting to find out how some badly injured staffers and outside rescuers helped others to escape the resulting inferno. As the book notes, “There could not have been as many survivors of the attack on the Pentagon without the persistent and selfless acts of others – military and civilian – who were themselves caught in the maelstrom or came unhesitatingly from elsewhere in the building to respond to the desperate circumstances facing the many victims trapped in the wreckage.”

Another chapter describes the efforts of firefighters to extinguish those orange rectangles of flame I saw that day, fed by thousands of gallon of jet fuel. Other sections cover medical treatment of the victims, securing the building, helping the survivors and the families of the victims, and the gigantic effort that allowed the Pentagon to be declared “open for business” on September 12. It’s a dramatic story, and Pentagon 9/11 tells it both factually and with compassion.

You can access this excellent book in multiple ways. To browse though it, go here. GPO still has copies of the first edition and will soon have a 10th anniversary edition with a new Foreword by Secretary of Defense Leon Panetta. You can also find an eBook version here. Finally, it’s also available in many libraries. Whichever format you choose, you’ll be rewarded by an unforgettable reading experience.

“Touching” is not a word usually applied to Government publications, but it’s an appropriate one for “Memoryscape,” one of the case studies in Restorative Commons: Creating the Health and Well-Being through Urban Landscapes. This U.S. Forest Service publication, one of Library Journal’s 2009 Notable Government Documents, is an attractively packaged and well-illustrated collection of thought pieces, case studies, and interviews focused on the idea that biophilia – the basic human need for contact with nature – can and must be fostered in urban settings. As Oliver Sacks says in his Foreword, “I would even suggest that a sort of subtype of biophilia may be hortophilia, or a special desire for gardens….In many cases, gardens and nature are more powerful than any medication.” I know that whenever I pass an urban common garden, it always evokes positive feelings in me, even though I’m not a gardener myself. A walk or hike in a park definitely takes me out of myself and my problems, and it seems to work that way for most folks I know.

All the more pressing then, is the need to make nature and gardens available in such places as Rikers Island (a jail), Red Hook (a blighted urban neighborhood in New York City), Fresh Kills Park (a landfill), and Bosnia-Herzegovina (the site of horrific ethnic cleansing in the 1990’s).The essays and interviews in Restorative Commons describe the innovative garden/landscape projects in these places and others, along with the stories of the people who are running the programs and those benefiting from them vocationally and psychologically.

And then there’s “Memoryscape,” about the place in Westfield, Massachusetts known as “100 acres.” Brian Murphy, his brother Harold, and many of their friends used this area – an area of trees, dirt roads, and wildlife – as their “romping grounds.” Brian was killed at the World Trade Center, and Harold used his skills as a real estate developer with an interest in open space conservation to have 30 acres of this urban landscape permanently preserved. He takes his brother’s kids there to show them their dad’s “place” and, aside from a planned trail, it will stay as it is, rusted train trestle and all, so they and future generations can romp there, too. There are informal 9/11 memorials like this in the Boston and LA areas, where the planes took off, in the Greater New York area and adjoining suburbs, and in the DC area, too. (We could see the smoke from the Pentagon from our office windows that day).

This is an inspiring and hope-filled book. You can get,view, or order your own copy here or find it in a library here.