The Constitution Annotated: The Pursuit of App-iness

In preparing for this Constitution Day blog post, not only did I retake the civics quiz from last year’s Constitution Day post (see Quiz: Are you smarter than an 8th grade Civics student?), I also scrolled through my tablet last night, reading the Preamble to the Constitution and looking up related quotes. Then it occurred to me: if Founding Father George Washington had been alive today, would he have been a PC or an Apple guy? I’m betting our pragmatic First President would be a PC guy. I’m pretty sure innovator Thomas Jefferson would have been a stylish iPad man, and Benjamin Franklin, inventor of the bifocals, would probably be sporting Google Glasses now and tinkering with them.

What is clear is that our Founding Fathers were strategic thinkers who realized that a fully functioning republic needed a clear but flexible code of law that evolved with the Nation. Thus, they wrote the Constitution of the United States, which has stood the test of time with over two centuries of amendments and interpretations by all branches of the U.S. Federal Government.

CONAN for the Librarian (and Lawyers)

Since 1913, the Senate has directed that a publication be issued summarizing the current state of the Constitution to date, with all the amendments and the official interpretations, with the analysis today provided by the Library of Congress’ Congressional Research Service. This publication is called The Constitution of the United States of America, Analysis and Interpretation, popularly known as the Constitution Annotated or “CONAN” among the real insiders.

In addition, many Americans, including Members of Congress, buy a pocket print edition of the Constitution and Declaration of Independence to carry around with them at all times. (Click on image to the left.)

This year marks the 100th anniversary of the Constitution Annotated publication, and to celebrate it and Constitution Day, the Government Printing Office (GPO) not only issued the Centennial Edition in print, but has also worked with the Senate Committee on Rules and Administration and the Library of Congress to develop and launch both a new mobile app as well as a web publication that make analysis and interpretation of constitutional case law by Library experts accessible for free to anyone with a computer or mobile device.

“Through this collaborative project, the Library of Congress and GPO are providing the public with timely access to an enhanced, authenticated version of the “Constitution Annotated” through GPO’s Federal Digital System. This is another example of how GPO works with Congress, the Library and other agencies to meet the information needs of the American people in the digital age.”

On May 19, 1821, years after the Constitution was adopted, John Adams wrote in a letter to Thomas Jefferson that:

“A free government is a complicated piece of machinery, the nice and exact adjustment of whose springs, wheels, and weights, is not yet well comprehended by the artists of the age, and still less by the people.”

Even though our Founding Fathers could not have envisioned a digital future complete with the Internet and smartphones, the framework they put in place has been able to roll with the times. Americans know that our system is indeed a “complicated piece of machinery,” with our laws serving as the user manual, but tools like the Constitution Annotated– in print or now online or on your mobile device– now exist to help keep our machinery of democracy well oiled. 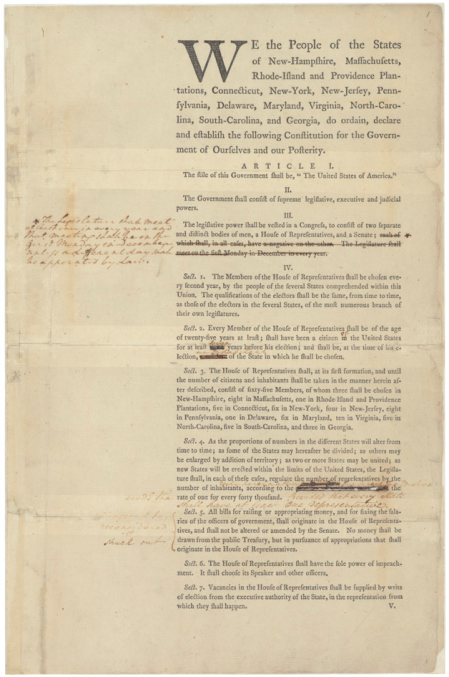 How can I obtain The Constitution Annotated?

1) Buy the Print Edition of The Constitution of the United States of America, Analysis and Interpretation, Centennial Edition

The Constitution Annotated web publication will be available on GPO’s Federal Digital System (FDsys) www.fdsys.gov as a digitally-signed, searchable PDF that includes a linked table of contents, a linked table of cases, a linked index and GPO’s Seal of Authenticity on every page.

This entry was posted on Tuesday, September 17th, 2013 at 6:41 pm and is filed under Business, Civics and Citizenship, Congress, Digital Publishing, Executive Branch, Federal Government Role, Government Printing Office (GPO), House of Representatives, Innovation, Judicial Branch, Legal Analysis, Legislative Branch, Libraries, Library of Congress (LOC), Mobile and Apps, National Archives and Records Administration (NARA), Senate, Teachers and teaching, U.S. Constitution, U.S. History. You can follow any responses to this entry through the RSS 2.0 feed. You can leave a response, or trackback from your own site.

4 Responses to The Constitution Annotated: The Pursuit of App-iness