The National Guard turns 375… and is still going strong

On December 13, 1636, the Massachusetts Bay Colony General Court issued a declaration that all able-bodied men between the ages of 16 and 60 were required to join the militia to defend against enemy attack and protect the settlements. 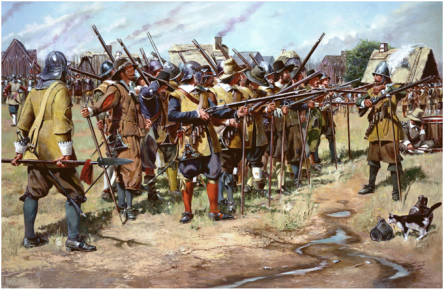 Image: The First Muster in 1637 took place after the December 13, 1636 Massachusetts General Court declaration established three regiments of “citizen soldiers” within the colony to defend against enemy attack and preserve villages established in the colony per English militia tradition. Source: “The First Muster” painting by Don Troiani.

Now, 375 years later, the National Guard still has the same mission and is an important part of the fabric that defends our country. The National Guard’s motto “Always Ready, Always There” is embodied in its founding when militias protected the colonies and today as the National Guard protects U.S. citizens at home and abroad.

In honor of this momentous occasion, the Government Printing Office has assembled a collection of National Guard publications, from history to present-day operations. 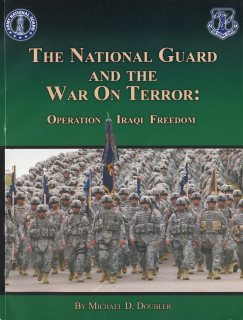 The National Guard and the War on Terror: Operation Iraqi Freedom is the third book in a series published by the National Guard Bureau about the National Guard’s role in major events from the first decade of the 21st century, including the terrorist attacks on September 11, 2001, Hurricane Katrina, the War in Afghanistan, and the Iraq War.

Operation Iraqi Freedom focuses on the early years of the Iraq War – the National Guard’s largest commitment of combat personnel since World War II.  Weaving together personal narratives, photographs, charts, and maps, the book tells the story of the Iraq War from the perspective of the National Guard’s citizen-soldiers and airmen and their role in the war from the lead up to war after the September 11, 2001 terrorist attacks to 2006 before the troop surge.

Operation Iraqi Freedom stresses that the National Guard has had a hand in every aspect of the United States’ engagement in Iraq from strategy and combat to stabilizing, training, and rebuilding the country. The author is very thorough in his explanations of conflicts and does not shy away from portraying the realities of war. 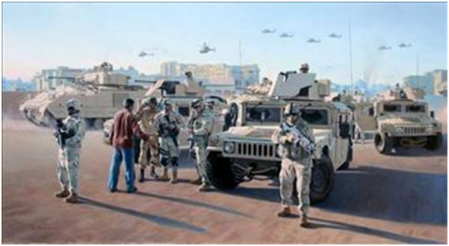 The book’s perspective rotates through National Guard units from various states detailing their missions and conveying to readers the national effort and representation of troops who are serving overseas. Operation Iraqi Freedom concludes with an “In Memoriam” tribute to members of the National Guard who have lost their lives during the Iraq War and a brief chronology of the war during the time period of the book from January 2002 to December 2006. These two closing features put the war in perspective considering other branches of the United States military that are also engaged in the Iraq War.

For 375 years, the National Guard has played a vital role in protecting the United States, which is illustrated in Operation Iraqi Freedom. This new role of supporting the other armed forces overseas in combat “warfight” missions is relatively new, but its other roles of homeland defense and security, emergency response here and abroad,and other domestic support missions are well-known and much appreciated by generations of Americans for the past 375 years. 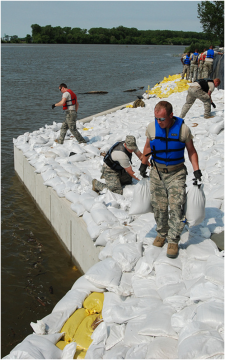 The National Guard’s almost four centuries of service is being recognized at the highest levels. It is important to note that on Monday, November 28, the U.S. Senate approved an amendment to the defense spending bill that– if passed in the final version by both houses–  would elevate the National Guard chief to the Joint Chiefs of Staff, joining the leaders of the Army, Navy, Air Force and Marines at the highest level of military and defense strategy.

Image:  DAKOTA DUNES, S.D. – A crew of Airmen with the 114th Fighter Wing of the South Dakota Air National Guard carefully place sandbags along a retaining wall where heavy equipment could not be used to reinforce the levee here on June 5, 2011. The Airmen are working alongside Army National Guard Soldiers to provide critical support to flood prevention operations as the Missouri River reached critical flood levels. Source: South Dakota National Guard; Photo by Sgt. Charlie Jacobson

How can you get The National Guard and the War on Terror: Operation Iraqi Freedom?

This entry was posted on Tuesday, December 13th, 2011 at 4:22 pm and is filed under U.S. Army, U.S. National Guard. You can follow any responses to this entry through the RSS 2.0 feed. You can leave a response, or trackback from your own site.