Whether you’re a frequent voter or you’re a newbie to the voting scene, we could all use a refresher on understanding and participating in United States elections … unless you teach U.S. Government, that is. For those of us who can hardly remember what we had for lunch yesterday, it’s probably time we try to retain at least a little bit of what we learned all those years ago.

To vote, you have to of course, first register … unless you live in North Dakota, the only state that does not require registration! You can register to vote by following the requirements for your particular state. While no two states run their elections the same, the steps to vote are the same in most states. Most states assign you a specific polling place, or voting location, that is close to the address you list on your voter registration. Every state has absentee voting, which means you can still cast your vote even if you can’t make it to your physical polling place on Election Day. In some states, you might need to provide a reason you can’t make it to the polling place. In others, you can vote absentee no matter what. Finally, if you’re busy on Election Day, in some states, you can vote early by casting your vote by mail or in person at the local election official’s office or at another location designated by the local election official. Come prepared on Election Day. Some states require voters to present identification at the polling location.

Members of the House of Representatives stand for re-election every two years. This year, 35 of the 100 Senate seats and all 435 in the House of Representative are up for grabs. Each state is divided into districts and each district votes for one representative. The number of districts depends on the population in each state. For example, California, which has a large population, has 53 representatives in the House. Alaska, on the other hand, has only three representatives since not many people live there! As for the Senate, each state is represented by two Senators, regardless of its population. Senators serve for six years, but elections for Senators are staggered. Every two years, one-third of the Senators run for re-election.

Interested in where congressional districts begin and end? Hang a map to help you remember congressional district boundaries in effect. The map, which is available at the U.S. Government Bookstore, includes county names and boundaries for each state, the District of Columbia, Puerto Rico, American Samoa, Guam, the Commonwealth of the Northern Mariana Islands, and the U.S. Virgin Islands.

In Presidential voting years, when you vote for the President on the first Tuesday in November every four years, you’re technically not casting your vote for President, but rather an “elector” who pledges to vote for either the Republican Presidential Nominee or the Democratic Presidential nominee in what is known as the Electoral College. Fifty states and the District of Columbia are each assigned a certain number of electors in a system that mirrors Congress: one elector for each of the 435 Representatives, one for each of the 100 Senators, and three electors for the District of Columbia. Each state receives a particular number of electors based on population size. Therefore, every ten years when the Census is conducted, some states might gain or lose electoral votes. In most states, the candidate who gets the majority of the popular vote takes all of its electors. Electors cast their state’s electoral votes in mid-December. A candidate must receive 270 of the 538 electoral votes to become President or Vice President.

So Election Day is over. But policymaking is only just getting started! Contact your representatives about issues that matter to you. And use the United States Senate Telephone Directory to do it. Each year the GPO produces this directory. It contains addresses and telephone numbers for United States Senators, Senate committee members, and their staff. Also, it presents information on caucuses, coalitions and bicameral organizations; the House of Representatives; the executive branch; and more. 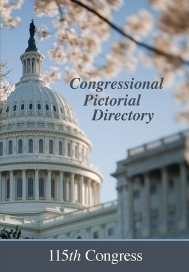 Be the life of the political party by getting to know your Congressmen and women! The GPO Bookstore also offers a Congressional Pictorial Directory. This handy guide provides a color photograph of each Member of the House of Representatives and the Senate of the 115th Congress and details each Member’s length of service, political party affiliation, and congressional district.

You’re all prepared for the polls. Happy voting!