A Plum Book of Political Positions 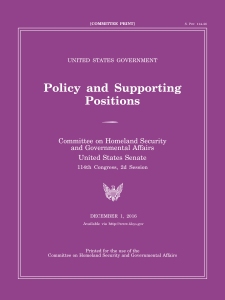 With the change of a new administration, learn about Presidential appointed and other positions within the Federal Government in the new 2016 United States Government Policy and Supporting Positions, or the “Plum Book” now available from the U.S. Government Bookstore.

What is the Plum Book? Known officially as the “United States Government Policy and Supporting Positions,” the Plum Book is published alternately by the Senate Committee on Homeland Security and Governmental Affairs or by the House Committee on Oversight and Government Reform, who handled this year’s version. The 2016 edition lists over 9,000 civil service leadership and support positions (filled and vacant) in the Legislative and Executive branches of the Federal Government that may be subject to noncompetitive appointments.

History of the “Plum Book” 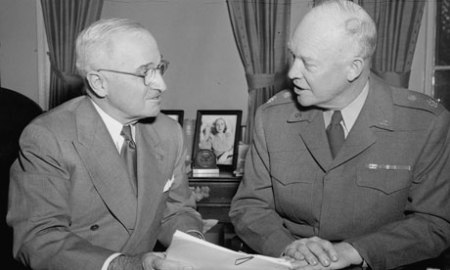 Image: Out-going President Truman meets with incoming President Eisenhower to discuss the transition. (Is that a draft copy of the first Plum Book that Truman is handing to Eisenhower? 😉

With a touch of humor, someone at the original publishers decided the book should have a purple or plum-colored cover to reflect that it contained the “plum” political appointee jobs, and the tradition has stuck ever since for the printed version.

What Type of Positions are Listed in the Plum Book?

The United States Government Policy and Supporting Positions 2016 (Plum Book) includes both politically appointed and Career Civil Service positions, agency heads and their immediate subordinates, policy executives and advisers, and the aides who report to these political appointee officials.  These encompass:

The duties of such positions may involve advocacy of Administration policies and programs, and the incumbents usually have a close and confidential working relationship with the agency head or other key officials.

To Fill or Not to Fill , that is the Question

Interestingly, the book lists ALL such political appointment positions, whether there is someone currently in the job or it was vacant as of June 30, 2016.  If the job was occupied by a career Federal employee appointee, the phrase “Career Incumbent” is shown without a name; otherwise, the name of the political appointee is listed.

And positions such as boards, committees or commissions that require “member” positions by political party affiliation are listed with the name of the incumbent along with a (D) for Democrat, (R) for Republican or (I) for Independent.

Type of Appointment and Salaries

Listings are labeled with letter codes that denote the type of appointment under which the position is categorized:

However, several categories of jobs can be filled by more than one type of appointment, e.g., SES positions listed in this publication may be filled by using career Federal employees or various outside appointments. On these, no ‘‘Type of Appointment’’ is shown for such positions when they are vacant.

Finally, information is included on the various base salary scales for each pay plan and level or grade, along with the percent above that base for different locality pay areas.

So if you are still hunting for that perfect holiday gift, it might be time to “pick a plum” or two—a 2016 Plum Book, that is—one to give, and one to keep for yourself!

How can I obtain a copy of United States Government Policy and Supporting Positions 2016 (Plum Book)?

Relive the first year of the Obama Presidency

Some highlights of those six months include the confirmation of Sonia Sotomayor as President Obama’s first nomination to the Supreme Court, the shaping of the health care law (Read our blog post: “Everything You Should Know About The Health Care Law“), and the continuing efforts to create jobs and rebuild the U.S. economy. The book also includes a section of official color photographs from events during the time period.

This book is part of the Public Papers of the Presidents series which consists of public writings, addresses and remarks made by the President and is the second volume of the Barack Obama Public Papers collection, which includes an eBook version of Book 1. (Read about the first volume in our blog post: “The First Collection of President Obama’s Public Papers.”)

As in other Public Papers volumes, the appendices provide listings of:

Public Papers of the Presidents series

The entire Public Papers of the Presidents series is published by the National Archives’ Office of the Federal Register (OFR) and includes two volumes per year, each volume covering a six-month period of the presidency, with the OFR checking remarks against a recording and signed documents against the original to ensure accuracy. The series started with President Hoover and continues to President Obama, with the exception of President Roosevelt who chose to have his papers published privately.

To learn more about the process of compiling the Public Papers of the Presidents, watch this video below on the production of President Obama’s first volume at the Government Printing Office (GPO):

Image: Excerpted from the video of the Making of the Public Papers of the President. Depicts President Obama in the Oval Office being presented with the first volume in his Public Papers printed by the Government Printing Office in April 2011. Pictured from left to right are: current Public Printer of the United States, Davita Vance-Cooks; previous Public Printer, William J. Boarman; President Barack Obama; Archivist of the United States, David S. Ferriero, and Director of the Federal Register, Ray Mosley.

The Public Papers of the Presidents series is also available on GPO’s Federal Digital System (FDsys). The public can digitally access the digitized volumes starting in 1991 with President George H. W. Bush through President Barack Obama, 2009 from this page on FDsys.

How do I obtain a copy of the Public Papers of the Presidents, Barack Obama 2009, Book 2?