This month marks NASA’s 56th anniversary. In those 56 years, NASA has made amazing contributions to modern American life. Yet, people often forget that many of NASA’s most meaningful contributions have nothing to do with space exploration. The fascinating book, NASA’s First A: Aeronautics from 1958 to 2008 by Robert G. Ferguson shines a light on NASA’s aeronautics program, an important but often underappreciated part of the agency. 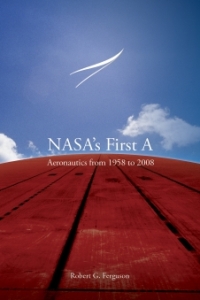 The chronological history of the aeronautics program begins in the book’s second chapter, which covers NACA (the National Advisory Committee for Aeronautics), the predecessor of NASA. Chapter three focuses on the creation of NASA and how aeronautics fit into the new agency as well as the contributions the program made to the “space race.” Chapter four covers the 1970s, a time when NASA faced pressures to contribute solutions to increasing energy and environmental problems and aeronautics research shifted to help tackle some of these issues. The fifth chapter discusses the 1980s when the Cold War created a strong focus on aeronautical R&D. The chapter also covers more quotidian, but equally important, contributions of the aeronautics program, like troubleshooting for wind shear and icing. Chapter six is about the 1990s, and focuses on aeronautics after the Cold War as well as the creation and eventual demise of two major aeronautics programs, the High Speed Research Program and the Advanced Subsonic Technology Program. The seventh chapter is the end of the book’s chronological history and it covers the three major research areas of the early 2000s: blended wing body design research, intergraded scramjet research, and air traffic control research.

The book is a great read. It offers an interesting introductory history of NASA’s aeronautics program, and readers will certainly no longer make the mistake of thinking that NASA is only concerned with space.

Shop Online Anytime: You can buy this as well as the following new publications from NASA (with FREE Standard Shipping worldwide) from the U.S. Government Online Bookstore website at http://bookstore.gpo.gov:

Visit a Federal Depository Library: Search for these in a nearby Federal depository library. You can find the records for most titles in the Catalog of U.S. Government Publications or CGP.

So many kids growing up in the United States dream of being astronauts, and flying through space. Many adult Americans can remember where they were when the Eagle landed, or when (sadly) the Space Shuttle Challenger exploded. You know you’re invested in American culture when you can successfully use the phrase, “Houston, we’ve had a problem” in a social conversation.

Image: In NASA’s Mission Control in Houston, Texas, in April 1970, there definitely was a problem with the Apollo 13 mission. Here, the Gold Team, directed by Gerald Griffin (seated, back of head to camera), prepares to take over from Black Team (Glynn Lunney, seated, in profile) during a critical period of the Apollo 13 mission to save it– and all the astronauts on board– from disaster. Source: NASA. Read a first-hand account by Apollo 13 Commander, Jim Lovell, of all the “problems.”

The National Aeronautics and Space Administration (NASA) is the reason why we have these touchstones in American culture.

On July 29, NASA celebrated the 55th anniversary of its founding in 1958; the agency has been doing its job passionately for the last fifty-five years.

When NASA hit its fiftieth anniversary, NASA issued commemorative volumes in 2009. NASA at 50: Interviews With NASA’s Senior Leadership takes a look at the new direction senior management wants to guide the agency towards after its first successful half-century.

It really is interesting for readers to look back at NASA’s storied past on this memorable occasion. NASA added to this retrospective  with the companion volume, NASA’s First 50 Years: Historical Perspectives. However, space exploration fans will be eager to learn more about NASA’s future as well as its past, and that’s the purpose of this book.

Since NASA’s fiftieth anniversary “found an agency in the midst of deep transition” as Steven Dick, NASA’s chief historian noted, the interviews in NASA at 50: Interviews With NASA’s Senior Leadership review the high points in that transition. Obviously, there’s solid coverage of the end of the Space Shuttle Program, but the text also covers senior management’s thoughts on their work with the new project called Constellation. Constellation includes multiple elements, such as the new launch vehicle Ares I, a human capsule named Orion, and the lunar lander Altair.

The two reporters from NASA’s Johnson Space Center, Rebecca Wright and Sandra Johnson, interviewed twenty-four members of senior NASA management to get their perspectives and subject matter expertise on the various program agendas planned for the coming years. The authors included questions directed to the general public more than you might suspect. For example, “Why would you encourage anyone to work for NASA?”, and “Do you find that aeronautics will continue to be a part of NASA in its future?” would appeal to anyone who is interested in working for NASA in years to come; the answers are given in plain, accessible language. Portraits of the interview subjects and an extensive index are included. Policy specialists, aerospace engineers, aerospace engineering and physics students and space exploration fans will all enjoy and take value from NASA at 50: Interviews With NASA’s Senior Leadership.

Another book for aeronautics and space exploration fans to explore while celebrating NASA’s fifty-five years is Coming Home: Reentry and Recovery From Space. It’s mainly a historical perspective of the technical aspects of shuttlecraft re-entry and recovery after landing. Although the authors used really plan, direct language when writing, the concepts covered are fairly high-level aeronautics for non-professionals to understand. For example:

“Even the CEV, a program that returns to a capsule concept with a blunt-body ablative heat shield and parachutes (or perhaps a Rogallo wing) to return to Earth (or perhaps, the ocean), proved a challenge for engineers” (p. x).

It’s probable that this volume would mainly be of interest to aeronautics and electrical engineers and physicists, or students or policy analysts of those fields, whose area of interest is space exploration. Since the language is so simple, though, I could imagine an ambitious high-school student who is interested in space reading this too, although she or he might need to research some of the tougher concepts (e.g., ablative in any sense other than grammatical cases). Coming home with a safe reentry and recovery was certainly of interest to the Apollo 13 crew!

If you do choose to celebrate NASA’s fifty-fifth anniversary, maybe the best celebratory method (in addition to eating cake) is to read more about NASA. Find out their next steps, and cheer them on in their quest to further science by:

“Explor[ing] the earth, solar system and universe beyond; chart[ing] the best route of discovery; and reap[ing] the benefits of Earth and space exploration for society” (About NASA, Web site).

How can I find these NASA publications?

You can find all the books mentioned here at the GPO Online Bookstore. While you’re at it, you might want to pick up a set of five full-color NASA bookmarks: NASA Space Shuttle Bookmarks: Atlantis, Challenger, Columbia, Discovery, Endeavour to keep your place in these books. Just like party favors, right?