Warfare: A Complex and Challenging Arena

The war in Ukraine is a grim reminder of the devastating effects of military conflict between nations. To better understand the challenges of warfare, the U.S. Government Publishing Office online bookstore provides a plethora of well-documented studies about military conflict. Here are two titles featuring critically important analyses of America’s engagement in recent war zones, and how the U.S. military interacts with civil organizations in order to effectively integrate military and civilian assets to the benefit of America’s defense and freedom.

Modern War in an Ancient Land: The United States Army in Afghanistan, 2001-2014 is an in-depth analysis of the U.S. military mission in Afghanistan that was America’s response to the 9/11 attacks. It examines the U.S. intervention in Afghanistan in October 2001 and the thirteen-plus years of conflict that followed. During this conflict, Army commanders operated under the assumption that by securing Afghans and their fledgling national government, the U.S. military was protecting America and the Western way of life. It includes graphic depictions of war on the ground as well as multiple maps. This resource provides a comprehensive and historical perspective on “America’s longest war.”

Unity of Mission: Civilian Military Teams in War and Peace

provides readers with a revealing perspective on complex military operations. It offers unique insights by soldiers, AID workers, nongovernmental organizations, and others with on the ground experience. The essays found within Unity of Mission provide a rich, diverse, and candid commentary about what worked and what didn’t work. This book will be enormously helpful for anyone assigned to a military command, an embassy, or any international mission.

About the author: Blogger contributor Ed Kessler is a Promotions Specialist in GPO’s Publications and Information Sales office. 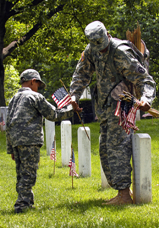 Memorial Day in the United States is a time to remember those members of the military who have died in service to our country.  Originally known as Decoration Day, this federal holiday originated after the American Civil War to commemorate the fallen Union soldiers as widows would turn out to decorate the graves.

In fact, as I write this, all available members of the 3rd U.S. Infantry Regiment, also known as The Old Guard, are a just a mile away from GPO headquarters at Arlington National Cemetery, planting over 280,000 small U.S. flags—one at each grave marker— that will stay in place just for Memorial Day weekend, carrying on an annual “Flags In” tradition started in 1948. 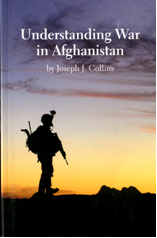 Many on this day take the time to reflect on the various military missions that resulted in the losses of brave service men and women, with our current war in Afghanistan offering the most recent opportunity for reflection.

A master at providing this analysis is Joseph J. Collins, author and professor at the National War College, who wrote the new book from the National Defense University called “Understanding War in Afghanistan” in order to provide military leaders, civil servants, diplomats, students and civilians the lessons in history of war and strife in that troubled nation.

Collins asks—and answers—a number of thought-provoking questions about the current war in Afghanistan:

To answer these questions, Professor Collins provides both historical background and analysis to put it into context, finishing with a look towards possible next steps:

Now in its twelfth year, the Afghanistan War is the longest war in U.S. history, surpassing even the Vietnam War.  Operation Enduring Freedom, with over 1,892 fallen servicemen and women just from the United States and over 1,000 casualties from other nations who form part of the coalition, is in the minds of many this Memorial Day.

Following the mantra of Spanish born American philosopher and writer George Santayana who wrote “Those who do not learn from history are doomed to repeat it,” Understanding War in Afghanistan helps provide us the basis to learn the lessons of history in this particular conflict in order to inform our future course.

“This is the required text for ‘Afghanistan 101’—a primer that skillfully explains the realities of a complicated country and America’s longest war. It is written in a clear, informative way that is accessible to citizens, students, and civilian and military personnel who want or need to learn more about one of the most important issues of our time.”

What better way to remember those who have fallen in Afghanistan than to learn about the cause for which they sacrificed all?

How Do I Obtain Understanding War in Afghanistan?