Who in America hasn’t heard those words ending man’s life’s limitation only to Earth – “The eagle has landed?” The words of Astronaut Neil Armstrong signaled the safe landing of the Apollo 11 lunar module on the moon. Fifty years and numerous moon landings later, the day of the moon landing is still worthy of national celebration. America can be proud of the bravery of men and women who’ve risked their lives to conquer space; for technological advances conceived and produced to support this human adventure like no other. A moment that captured the spirit of a nation neither bound by the limits of the unknown nor the uncertainty of reaching for the stars.

To take part in this national day of courage and achievement, now you can purchase one or more of the published portraits of the adventures and challenges met by one of America’s most valuable resources, the National Aeronautics and Space Administration (NASA); a name that may not capture the true essence of its magnificence, but a well-documented story of mankind at some of its most memorable moments.

The U.S. Government Bookstore offers the following NASA publications related to the remarkable history of the Apollo 11 mission.

Exploring the Unknown: Selected Documents in the History of the United States Civil Space Program: V. VII: Human Spaceflight: Projects Mercury, Gemini, and Apollo. This publication includes a selection of expert essays and official documents about the evolution of U.S. human spaceflight programs: Projects Mercury, Gemini, and Apollo. It emphasizes important documents relating to aerodynamics and man-in-space research as well as recommended activities the lunar vehicle should do and what symbolic items should be brought for the First Lunar Landing (such as the iconic American flag planted on the moon).

NASA’s First 50 Years: Historical Perspectives; NASA 50 Anniversary Proceedings. A wide array of scholars turn a critical eye toward NASA’s first 50 years, probing an institution widely seen as the premier agency for space exploration in the world. Fifty years after its founding, this NASA publication offers historical perspectives to help illuminate what came next.

View of an astronaut’s foot and footprint in the lunar soil. Image courtesy of NASA.

On July 29, 1958, President Dwight D. Eisenhower signed the NASA Act. Over the next 50 years, NASA achieved spectacular feats, from advancing the well-established field of aeronautics to pioneering new fields of Earth and space science and human spaceflight. In the midst of the geopolitical context of the Cold War, 12 Americans walked on the Moon, arriving in peace “for all mankind.” Humans saw their home planet from a new perspective, with unforgettable Apollo images of Earthrise and the “Blue Marble,” as well as the “pale blue dot” from the edge of the solar system. Since, spacecraft have studied Earth, probed the depths of the solar system and the universe beyond. In the 1980s, the evolution of aeronautics gave us the first winged human spacecraft, the Space Shuttle, and the International Space Station that stood as a symbol of human cooperation in space as well as a possible way station to the stars. Though important to note, given the Apollo fire and two Space Shuttle accidents, NASA has also seen the depths of tragedy. 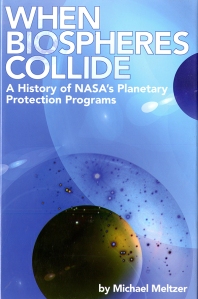 When Biospheres Collide: A History of NASA’s Planetary Protection Programs. This book from the NASA History Series tackles the interesting duo of biological problems that should be familiar to anybody who has seen photos of Apollo astronauts quarantined after their return to Earth. Namely, how do we avoid contaminating celestial bodies with Earthly germs when we send spacecraft to study these bodies, and how do we avoid spreading foreign biological matter from space when our robotic and human spacefarers return to Earth? Biological matter from an external system could potentially cause an unchecked epidemic either on Earth or in space so strict precautions are necessary. Problems identified. Problems overcome.

Project Apollo: The Tough Decisions. This monograph presents the history of the manned space program from September 1, 1960 to January 5, 1968, the most critically important period during which NASA validated its ability to successfully venture beyond earth’s gravitational limits. Outlines detail the steps taken from the early Mercury days through the operation tests conducted with Gemini, to the qualification of Apollo. It describes the key technical, operational, and management milestones and how key issues in each phase of the space program were resolved. Anyone thinking about becoming a space adventurer? Read first-hand how NASA has made such ventures soon within our reach.

Many other space related adventures and fascinating articles about new products created by America’s space journey are available here.

This entry was posted on Friday, July 19th, 2019 at 12:11 pm and is filed under NASA, Science & Technology. You can follow any responses to this entry through the RSS 2.0 feed. You can leave a response, or trackback from your own site.