Military Transportation: “Nothing Happens Until Something Moves”

Transportation infrastructure is quite literally the foundation of our country. Interstate highway trucks and freight trains get people and products where they need to go. Across bridges, along rail lines, and through tunnels, transport mobility is a part of life. And it’s also critical for modern Army readiness. In fact, there is a little known unit specializing in rapid troop and cargo delivery to distant theaters. It’s called the U.S. Army Transportation Corps.

Spearhead of Logistics: A History of the United States Army Transportation Corps

This U.S. Army Center of Military History text chronicles over 200 years of U.S. military transportation. The “need to organize, control, equip, and man transportation resources” became evident during the Revolutionary War. Borrowing from the organized transport network of the merchant class, the Continental Congress authorized a Quartermaster General to contribute logistical support—mostly in the form of horses and river boats—to Revolutionary forces. Since then, every war, expeditionary operation, and worldwide commitment has been supported by what eventually became the Transportation Corps of today.

Corps history is in step with the timeline of transportation growth. Steamboats in the Mexican War. Locomotives in the Civil War. Wagons in the Spanish-American War. Transport from this era “was the prototype of that required for a modern war in the Industrial Revolution.” Army transportation matured dramatically with wartime demands. Troop movement in both world wars required considerable coordination. Motor vehicles were first employed in World War I when “truck convoys [carried] supplies from the ports to the forward areas.” Horsepower was officially out and “animal power would never again be a major consideration for the U.S. Army.” 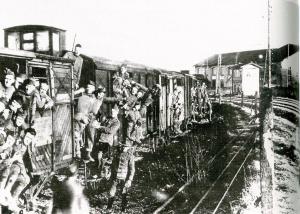 Forty men and eight horses. U.S. troops on their way to the trenches, 1918. Excerpt from publication.

When the world once again charged into a world war, the U.S. military expanded its transport mission. As it was “the first time U.S. troops were deployed throughout the world,” all ground and water transportation reorganized under one agency, the Transportation Corps. The newly formalized unit brought military might to bear in the beachhead landing on Normandy, campaign into the heart of Nazi Germany, MacArthur’s assaults in the Pacific theater, and the Berlin Airlift.

With continued speed and efficiency, the Transportation Corps sustained a massive combat force in Desert Storm. In a seven-month period, Corps officers participated in the “largest battlefield movement ever recorded for the time allotted.” Sea port and airlift operations and movement of “combat force[s] into attack positions…was one of the most significant achievements in the history of the Transportation Corps.”

The Transportation Corps has embraced new technology and provided orderly service to the mission of defense. Without Army transport, personnel, equipment, and supplies would be immobilized. The book ends with an Albert Einstein quote that perfectly describes the Corps: “nothing happens until something moves.”

HOW DO I OBTAIN THIS MILITARY HISTORY PUBLICATION?

This entry was posted on Friday, May 13th, 2016 at 10:11 am and is filed under Center of Military History, Department of Defense, Military History, U.S. Army. You can follow any responses to this entry through the RSS 2.0 feed. You can leave a response, or trackback from your own site.