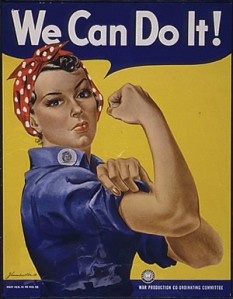 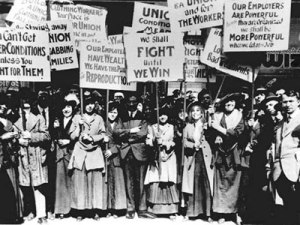 National Woman’s Day (NWD) has been observed since the early 1900s.

The Library of Congress and other agencies offer many rich collections related to Women’s History Month. You can view a list here.

Also a great resource on the topic of women’s history is the National Women’s History project. According to their site, this organization “recognizes and celebrates the diverse and historic accomplishments of women by providing informational services and educational and promotional materials.” The theme this year from the National Women’s History Project is Weaving the Stories of Women’s Lives. You can read about their 2015 honorees here.

A new publication from the National Defense University ties in well with this theme. Titled “Women on the Frontlines of Peace and Security,” this book includes a foreword by Hillary Rodham Clinton and Leon Panetta. The basic premise is clear: if we hope to prevent conflict and promote peace, we must empower women as full partners. Half of the world’s population are women and yet the decisions affecting women—economics, security, government structure, education, employment, war, and peace are often systematically being made without women’s representation. 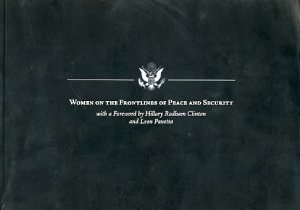 In this publication, experts from human rights activists, developmental professionals, and military leaders, share the importance of bringing together the diverse voices of these under-represented women. And while the focus is on the frontlines of military and civil conflict, the stories and case studies indeed weave the stories of women’s lives in readable and well-documented summaries. Included in the volume are numerous photographs of women participating in the governing, protecting, and policing in their homelands or as part of peacekeeping forces. The photographs are an important part of the message of this book, showing women in positions of authority and providing security and protection.

The discussions are broken into five categories:

The goal of the book is to continue the dialogue on the importance of including women in security and development of international peace. By continuing to govern and make decisions with half the population excluded or ignored, security risks are greatly increased and sense of community and opportunities for peace are even more decreased. It’s a great read with a great collection of historic photographs.

The U.S. Government Bookstore offers an entire collection of publications focused on women’s issues and women’s history. Check it out here.

There are also resources available on the topic from GPO’s Catalog of U.S. Government Publications (CGP). Here are just a few examples.

For an interesting insight into the history of women in the U.S. Government Publishing Office’s workforce, check out these two new webcasts, “Women in the GPO Workforce – GPO’s Women’s History Month (2015),” presented by GPO’s Agency Historian, George Barnum.

For access to great publications from the U.S. Government:

This entry was posted on Thursday, March 19th, 2015 at 1:56 pm and is filed under Human Rights, Library of Congress (LOC), National Defense University, Women. You can follow any responses to this entry through the RSS 2.0 feed. You can leave a response, or trackback from your own site.