“Santa, We Got Your Six!” NORAD’s Santa Tracker Goes High-Tech

This article is Part 2 of a two-part series on NORAD’s Santa Tracker by Government Book Talk and explores the fascinating technology NORAD uses today to keep the Abominable Snowman, the mean Mr. Grinch, and Jack Frost from spoiling Santa’s big flight on Christmas Eve.

“Click here to read the popular Part 1 article, “Tracking “Big Red One”: NORAD’s Secret Santa Mission” which tells the history of how a fortunate advertising mistake in 1955 and a colonel’s heartwarming response to kids led to NORAD tracking Santa Claus.

In the North American Aerospace Defense Command (NORAD)’s 58-year history of tracking Santa Claus (Santa’s call sign for NORAD is “Big Red One”), it has continued to innovate and expand its Santa-support mission with the addition of new technology. 2013 is no exception.

In Part 1 of our @NORADSanta Tracker series, we learned that NORAD’s mission of defending North America was expanded to include tracking Santa Claus’ flight on Christmas Eve back in 1955. 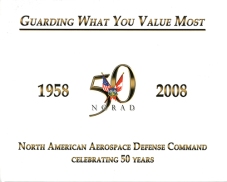 Guarding What You Value Most: North American Aerospace Defense Command Celebrating 50 Years (available in Hardcover Print or as an eBook) is the terrific publication documenting NORAD’s illustrious 50+ years of  history and provides easy-to-follow timelines of key NORAD events along with copious color photographs, maps and snippets of history of this important organization.

“Today, using the same technology used to perform their day-to-day mission— satellites, high-powered radars and jet fighters— NORAD tracks Santa Claus as he makes his Yuletide journey around the world.”

To learn what NORAD & NORTHCOM (USNORTHERN Command) do when they aren’t tracking Santa, you can also visit their Facebook page.

NORAD has been as busy as Santa’s workshop in 2013, updating their systems to provide the ultimate Santa tracking capability. In a November 27 press release, NORAD is ready to track Santa’s flight, NORAD cites some of these innovations:

From intelligence to weather, satellites to ships, missiles to manned aircraft, NORAD has a wide variety of technology and processes that are deployed to protect North America and support special missions like helping “Big Red One.”

Santa Drops in for a Sneak Peek

Santa dropped into the NORAD Command Center in September 2013 to get a sneak peek at some of the innovations. Said Santa during his visit:

“NORAD Tracks Santa defines my sleigh as a versatile, all-weather, multi-purpose, vertical short-take-off and landing vehicle capable of traveling vast distances without refueling. My reindeer and I call it the world’s most magical gift transporter. Ho ho ho!”

Image: Santa Claus drops in for a sneak peek of the Santa Tracker preparations on Thursday, Sept. 26, 2013, at the NORAD and USNORTHCOM headquarters at Peterson Air Force, Colo. Photo Credit: Michael Kucharek

On November 15, 2013, NORAD held a test flight incorporating all the technological know-how and innovations. During the test flight, NORAD personnel from the United States and Canada ran through checks of the technology, systems, processes and intelligence in place that are normally used to defend against threats but during Christmas are used to help Santa Claus complete his mission.

A video of this test flight that includes an overview of this impressive technology can be viewed for the first time in a NORAD Tracks Santa Command Center video of the Santa 2013 Test Flight.

In the comms [communications] check during the Santa test flight, we learn that the “Intel” [Intelligence] team verified that Jack Frost and Abominable Snowman would not interrupt Santa’s important journey on Christmas Eve. The Cyber team ensured that the “anti-Grinch viral” was in place to ensure the nasty green guy doesn’t steal Christmas this year via cyber-attack. And other NORAD personnel confirmed their assessment of the “load-bearing capacity for all rooftops that Santa will be landing on.”

One of the more interesting tidbits is learning of the upgrades made to ground-based radar systems that can now detect heat signatures from smaller objects in the air, “like the heat generated from Rudolph the Reindeer’s red nose.”

Strangely, the use of a fighter jet escort for Santa has generated some controversy this year, even though this is part of the NORAD Santa Tracker tradition that has been in place for years.

“Did you know Santa flies faster than starlight? He flies even faster than our fighter jets and slows down for our jets to come up beside him. They tip their wings to say hello, he always waves back and then is off again in the twinkle of an eye!”

However, with some new concerns on the part of a children’s advocacy group which said that the animated video on the NORAD Tracks Santa website “injects militarism into Christmas by showing fighter jets escorting Santa’s sleigh,” NORAD issued this statement on December 3, 2013:

Hi Folks,
We know there have been some questions about our #NORAD fighter jets escorting #Santa this year; this isn’t new. Every year we use our military satellites, radars, fighter jets and Santa Cams to track #Santa during his Yuletide journey. These are the same assets we use to provide homeland defense for North America every day of the year. We talk about this every year.

Each year, we look for ways to update the #NORAD Tracks #Santa program to keep it fresh and interesting. We have always showcased our military assets for tracking Santa on our sites. In fact, each year, the Canadian #NORAD Region (CANR), announces the names of the escort fighter pilots responsible for accompanying #Santa across Canadian skies.

We know for many families that #NORAD Tracks #Santa has become part of your Holiday Traditions. We know that is a huge honor and responsibility. We are proud to track #Santa each year! 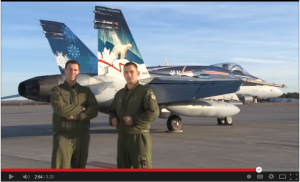 You can see the two Canadian NORAD fighter jet pilots who were designated to escort Santa through North American airspace in 2012 (see minute 2:27 on the Headquarters NORAD Holiday Message 2012.)

Said the Canadian fighter jet escort pilots to Santa Claus:“We’re going to be your escort for this fantastic voyage… We’ve got your six.”

“I got your six” basically means “I’ve got your back” or “I have you covered.” Comes from the old pilot system in which directions correspond to hours on the clock, where 12 o’clock is forward and 6 o’clock is behind. Thus anyone behind you is “at your six.”)

Santa Tracker Technology for Citizens on the Ground

Private citizens around the world can get into the Santa Tracker action as well. These new consumer-oriented innovations from NORAD and its over 55 private partners help you become part of the worldwide Santa Claus mission:

This video gives a history of how the Santa Tracker started in 1955 and some of the user technology.

NORAD Santa Tracker has a number of games and interactive features to help citizens become involved in the Santa tracking mission and enjoy the holiday season:

How can I get a copy of “Guarding What You Value Most: North American Aerospace Defense Command Celebrating 50 Years, the wonderful hardcover book or eBook of 50 years of NORAD history chock full of color photos and anecdotes, including the Santa Tracker story?

About the Author: Government Book Talk Editor Michele Bartram is Promotions Manager for GPO’s Publication and Information Sales Division in Washington, DC, and is responsible for online and offline marketing of the US Government Online Bookstore (http://bookstore.gpo.gov) and promoting Federal government content to the public.  She has been a faithful NORAD Tracks Santa fan for years!

This entry was posted on Monday, December 23rd, 2013 at 1:53 pm and is filed under Aviation, Children, Consumers, Department of Defense, Digital Publishing, Family, Gifts, Innovation, Military History, NORAD, Teachers and teaching, Technology, U.S. Air Force, U.S. History. You can follow any responses to this entry through the RSS 2.0 feed. You can leave a response, or trackback from your own site.

19 Responses to “Santa, We Got Your Six!” NORAD’s Santa Tracker Goes High-Tech