Quiz and History for Bill of Rights Day December 15 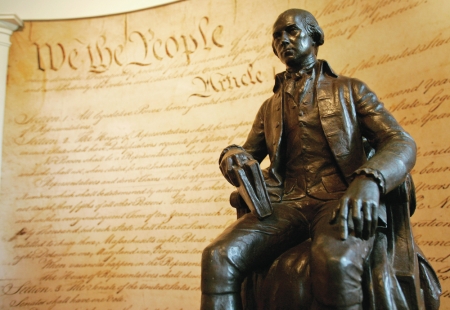 We celebrate Bill of Rights Day on December 15 every year in the midst of the bustling holiday season. Although it’s not a Federal holiday, it’s definitely a day for American citizens to commemorate the freedoms we enjoy by law. And no, the right to shop—while popular in America— is not listed in the Bill of Rights!

History of the Bill of Rights

The Founding Fathers drafted the United States Constitution during the First Constitutional Convention, held from May through September 1787 in Philadelphia. The completed draft constitution, sent to the States for ratification in September 1787, did not include any mention of individual rights. The framers’ focus was largely on structuring a strong government, and getting that structure put into place. Without such a structure, the Founding Fathers feared the country’s collapse into chaos or new attacks from outsiders. They left the issue of individual rights without adding it to the Constitution during that meeting.

As a result of this omission, Edmund Randolph, George Mason, and Elbridge Gerry refused to sign the Constitution on principle. Maryland delegates Luther Martin and John Francis Mercer reportedly walked out of the Convention, at least in part because the draft did not include a Bill of Rights. In September, Randolph, Mason and Gerry joined in asking for a second constitutional convention to address the issue of personal rights. All three men advocated strongly for a bill of rights throughout most of the constitutional convention. The people ultimately adopted the Constitution, sans any bill of rights, on September 17, 1787. Eleven states ratified it and it went into effect in 1789.

Founding Father James Madison was a delegate from Virginia who had been a key actor and speaker at the First Constitutional Convention. He had held onto the idea of the individual freedoms as discussed at that Convention. Although Federalist Madison was originally a skeptic about needing a Bill of Rights, like Randolph, Mason and Gerry he came to believe that the inclusion of personal rights was imperative to be added to the United States Constitution.

In Madison’s view, the value of a listing of rights was:

Thus, while serving in the first U.S. House of Representatives, Madison framed and introduced the Bill of Rights as legislative articles to amend the Constitution on June 8, 1789.

He used as a model George Mason’s Virginia Declaration of Rights, written in May 1776, and also based his legislative articles in part on the English Bill of Rights (1689), the Magna Carta and other documents. 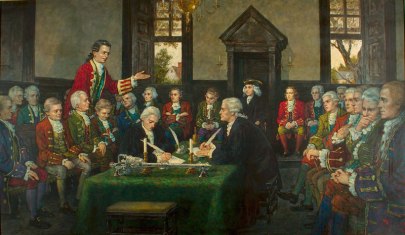 What rights are in Bill of Rights?

Madison included in his articles a list of rights of the individual, such as free speech, freedom of religion, freedom of the press, free assembly, freedom from unreasonable search and seizure, and others, as well as some limits on government powers.

Image on the right: Madison reading his Bill of Rights to Congress. Courtesy: University of Missouri-Kansas City School of Law.

On August 21, 1789, the U.S. House of Representatives adopted Madison’s articles, proposed them in a joint resolution of Congress on September 25, 1789, and finally ratified them on December 15, 1791.

The Bill of Rights consists of the first ten amendments to the Constitution, and is a key “fundamental document” of the United States Federal government. 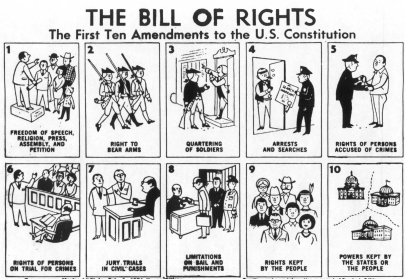 Where can you learn more about the Bill of Rights? 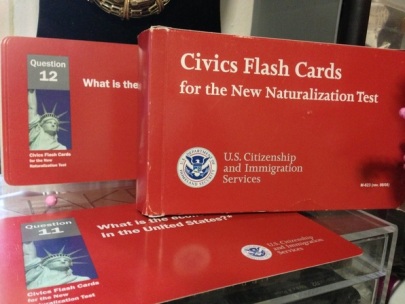 Kids in school, or adults wanting to revisit the fundamentals they learned in civics classes, can learn a lot from the Civics Flash Cards for the U.S. Naturalization Test (English Version)—and obviously the target audience, U.S. residents who want to become American citizens, will benefit from studying these, too.

You can also listen to the same questions in English on the USCIS (US Citizenship and Immigration Services) website. (I didn’t see them offered in Spanish on their site, though.) If you’re cramming for the naturalization or a civics exam, listening to the questions is excellent reinforcement for your study plan.

Mini-Quiz from the Citizenship Test 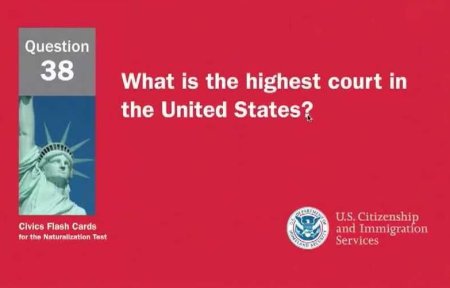 If you’ve already read this post, or studied the Constitution, you will probably ace questions #1 and #2 of the United States naturalization test for citizenship:

For even more challenging questions based on the U.S. Citizenship test, take our fun Quiz: Are you smarter than an 8th grade Civics student?

In-depth civics questions can be answered by the capsule summary answers to the questions in Learn About the United States: Quick Civics Lesson for the Naturalization Test 2013 (Book Plus CD). Students need to know the principles and background behind the answers, not just the answers themselves, obviously.

Question six asks, “What is ONE right or freedom from the First Amendment?” The text lists the possible answers, and then relates the reasons for the guarantee of those freedoms. The authors explain freedom of expression as follows:

You’ll definitely have a thorough grounding in the basics of American Federal government by the time you’re done with the lesson.

The Right to Exercise… Your Rights, That Is

Exercise your right to open discussion by reading some of these documents, and talking to friends about them. If you are a school student, maybe you’ll have an opportunity to write about the Bill of Rights or the freedoms the Bill of Rights guarantee.

In this year, the 150th anniversary of the Emancipation Proclamation and the 50th anniversary of three significant events from the Civil Rights movement— the March on Washington for Rights and Freedom, the murder of African-American civil rights activist Medgar Evers who was involved in efforts to overturn segregation at the University of Mississippi, and the 16th Street Baptist Church bombing in Birmingham, Alabama— it’s a good time to reflect on our civil rights and liberties, and how lucky we are to have them.

How can you obtain official publications that explain the Bill of Rights and other documents of American rights?

About the author(s): Adapted by Government Book Talk Editor-in-Chief and the US Government Printing Office (GPO) Promotions & Ecommerce Manager, Michele Bartram, from an original blog post by Jennifer K. Davis from GPO’s Library Services & Content Management Division that supports the Federal Depository Libraries Program (FDLP). Happy holidays from us both!

This entry was posted on Friday, December 13th, 2013 at 4:03 pm and is filed under Award Winning Books, Children, Civics and Citizenship, Civil War, Congress, Consumers, Department of Homeland Security, Executive Branch, Federal Government Role, House of Representatives, Human Rights, Judicial Branch, Legal Analysis, Legislative Branch, Notable Government Documents, Teachers and teaching, U.S. Citizenship and Immigration Services, U.S. History. You can follow any responses to this entry through the RSS 2.0 feed. You can leave a response, or trackback from your own site.