BP in Hot Water over Deepwater

As the BP Oil Spill civil trial begins this week, the Federal Government will attempt to prove whether British Petroleum (BP) and/or any of its contractors such as Transocean (RIG), the owner and operator of the Deepwater Horizon oil rig, and Halliburton (HAL), which was responsible for pouring the cement plugs in the well, were “grossly negligent” and thus financially liable in causing the deadly BP Deepwater Horizon offshore oil rig explosion on April 10, 2010, and the blowout of the Macondo well.

The initial explosion killed 11 oil rig workers and triggered a subsequent oil spill which dumped millions of barrels of crude oil into the Gulf of Mexico, with the full extent of the long-term ecological and economic damage to the Gulf states and aquatic and wildlife still unknown.  With tar balls linked to the BP oil spill still washing ashore from Louisiana and Alabama to as far away as Australia, if BP is found “grossly negligent” instead of “simply negligent,” it will be on the hook for $17.6 billion in additional clean-up costs on top of the $4.5 billion fine for the criminal case settled in November 2012.

The National Commission on the BP Deep Water Horizon Oil Spill and Offshore Drilling produced two landmark and controversial reports about the oil spill causes and consequences that are critical in understanding the Government’s case against BP:

2)      Deep Water: The Gulf Oil Disaster and the Future of Offshore Drilling, Report to the President, January 2011.

Established by Executive Order 13543 on May 21, 2010 by President Barack Obama, the mission of the National Commission on the BP Deep Water Horizon Oil Spill and Offshore Drilling Commission was to examine the relevant facts and circumstances concerning the root causes of the Deepwater Horizon explosion and develop options to guard against, and mitigate the impact of, any oil spills associated with offshore drilling in the future. 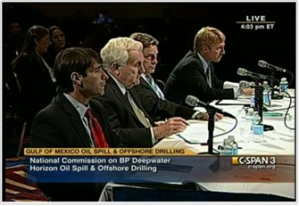 In addition, they were to recommend any needed improvements to Federal laws, regulations, and industry practices concerning the oil and gas industry.

Key areas of inquiry for the Commission included:

The first order of business for the Commission was to carry out the directive in the Executive Order to “examine the relevant facts and circumstances concerning the root causes of the Deepwater Horizon oil disaster.” They instructed the Commission‘s Chief Counsel Fred Bartlit and his investigative team to provide “the most comprehensive, coherent, and detailed account of the events leading up to the blowout and explosion” of Macondo, the name of BP’s offshore prospect in the Gulf of Mexico in the sector called the Mississippi Canyon Block 252, or MC252 where BP was drilling at the time of the accident.

The result was this report, Macondo: The Gulf Oil Disaster. Chief Counsel’s Report 2011, which provides additional details and documentation supporting the findings in the Commission’s final report.

The respected Library Journal, in selecting the Macondo report as one of its “Notable Government Documents” for 2011, said:

“The National Commission on the BP Deepwater Horizon Oil Spill was created by President Obama and charged with investigating the root causes of the largest accidental marine oil spill in the history of the petroleum industry. The committee concluded that the cause of the blowout was not mechanical. Instead, a number of poor management decisions, combined with an inadequate regulatory structure and an indifferent regulatory agency, overwhelmed the safeguards designed to prevent such disasters. Plenty of illustrations and photographs offer a glimpse into the technology of offshore oil rigs.” – LJ

For trial watchers, this publication is a must-read as much of the initial documentary evidence is included.

THE FINDINGS AND RECOMMENDATIONS

The second and final report is the best-selling Deep Water: The Gulf Oil Disaster and the Future of Offshore Drilling, Report to the President, January 2011. It not only offers the full account of what happened in the Gulf of Mexico on April 20, 2010 and why, but also offers recommendations on proposed actions, changes in company behavior, reform of government oversight, and investments in research and technology that will be required to avert future disasters.

In Part I: The Path to Tragedy, “Chapters 1 through 3 describe the events of April 20th on the Deepwater Horizon, and, more important, the events leading up to it in the preceding decades—especially how the dramatic expansion of deepwater drilling in the Gulf was not met by regulatory oversight capable of ensuring the safety of those drilling operations.

In Part II: Explosion and Aftermath:  The Causes and Consequences of the Disaster, Chapters 4 through 7 lay out the results of the Commission’s investigation in detail, highlighting the crucial policy-related issues: the specific engineering and operating choices made in drilling the Macondo well, the attempts to contain and respond to the oil spill, and the impacts of the spill on the region’s natural resources, economy, and people—in the context of the progressive degradation of the Mississippi Delta environment.

Throughout the book, the Commission makes the case that outlines a number of primary conclusions, including these unsettling findings:

Delivered to the President on January 2011, the final report starts with a poignant dedication “to the 11 men who lost their lives on the Deepwater Horizon rig on April 20, 2010 and to their families, in hope that this report will help minimize the chance of another such disaster ever happening again.”

Will it help prevent another such disaster? Read these publications and decide for yourself.

How can I buy these BP oil spill publications?

About the Author:  Michele Bartram is Promotions Manager for GPO’s Publication and Information Sales Division in Washington, DC, and is responsible for online and offline marketing of the US Government Online Bookstore (http://bookstore.gpo.gov) and promoting Federal government content to the public.

This entry was posted on Monday, February 25th, 2013 at 6:15 pm and is filed under Disasters, Gulf Coast, New Orleans, Notable Government Documents, Presidential Commissions, Uncategorized. You can follow any responses to this entry through the RSS 2.0 feed. You can leave a response, or trackback from your own site.

6 Responses to BP in Hot Water over Deepwater