After watching Secretary of State Hillary Clinton’s interview about the State Department’s release of their Country Reports on Human Rights Practices for 2010, I had to blog about this important annual publication.

In its 35th year for 2010, Country Reports on Human Rights Practices are Congressionally mandated reports produced by the U.S. Department of State that provide encyclopedic detail on human rights conditions in each of the 194 countries that are members of the United Nations.

The 2010 version available from GPO is a two-volume set that provides an overview of the human rights situation around the world as a means to raise awareness of human rights conditions, in particular as these conditions affect the well-being of women, children, racial and religious minorities, trafficking victims, members of indigenous groups and ethnic communities, persons with disabilities, sexual minorities, refugees, and members of other vulnerable groups.  Grouped by region, the country reports detail the situation in each member nation, and the set also provides an introduction and preface describing overall trends as well as detailed appendices.

What are Human Rights?

With the end of World War II, and the creation of the United Nations, the international community vowed to never allow atrocities like those experienced during the war to happen again. World leaders decided to complement the UN Charter with a road map to guarantee the rights of every individual everywhere, with the resulting document becoming The Universal Declaration of Human Rights.

Image: In 1950, on the second anniversary of the adoption of the Universal Declaration of Human Rights, students at the UN International Nursery School in New York viewed a poster of the historic document. Source: United Nations

The Universal Declaration of Human Rights was proposed 64 years ago next month and adopted by the UN General Assembly on December 10, 1948. This defines the following universal human rights across all members of the United Nations: 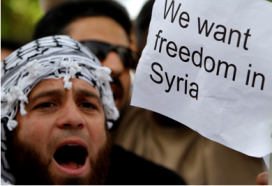 The Country Reports also serve as a progress report in relation to previous years by outlining which countries are improving and which are backsliding as far as human rights are concerned. The 2010 reports praise Colombia, Guinea, and Indonesia for their marked improvements shown that year, and notes Ukraine for backsliding. Check the book for details on each country’s status.

The 2010 report discusses three important trends from the year including:

1)      Persecution of Vulnerable Groups: the continuing rise of violence, persecution, and official and societal discrimination of members of vulnerable groups, often racial, religious, or ethnic minorities or disempowered majorities;

2)      Repression of Civil Society and Growth of Advocacy Groups: the repression of civil society in different countries and the explosive growth of non-governmental advocacy organizations focused on a wide range of democracy and human rights issues and causes; and

3)      Rise of Web and Mobile Technology: “the dramatic growth of the Internet, mobile phones, and other connective technologies that allow instantaneous communications to billions of people across the globe.”

Further information on all three of these trends is more fully documented in the Introduction to this year’s report, as well as in specific country reports.

The Country Reports on Human Rights Practices for 2010 outlined the negative trend of the continuing escalation of violence, persecution, and official and societal discrimination of members of vulnerable groups, often racial, religious, or ethnic minorities or disempowered majorities.

In many countries this pattern of discrimination extended to women; children; persons with disabilities; indigenous; lesbian, gay, bisexual, and transgender (LGBT) persons; and members of other vulnerable groups who lacked the political power to defend their own interests.

The report also notes that “often members of these groups were denied economic opportunity or the ability to abide by their social or cultural traditions or practices or were restricted in their ability to speak freely, to assemble peacefully, or to form associations or organizations.”

For example, the report notes that there is increasing exploitation of laborers and threats against workers for attempting to unionize in many countries, as well as increasing violence against members of the LGBT community.

Civil societies rebel against repression: The rise of the “Arab Spring”

By the end of 2010 which is when this report finishes, the issues relating to repression of civil society were giving rise to the so-called “Arab Spring.” Maria Otero, Under Secretary for Democracy and Global Affairs at the U.S. State Department, noted that this report captured these conditions in Egypt and Iran that were leading to protests, and “some of the areas we are seeing changing in the Middle East as demonstrating the inability in those of societies of civil societies to express themselves as one of the problems that emerged.”

Tools of rebellion: The Internet, social media and mobile technology 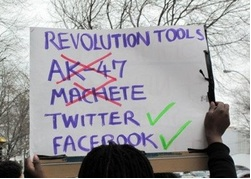 One of the more interesting trends that added fuel to these rebellions was a key theme in the 2010 report, namely “the explosive way in which the Internet, mobile phones, and other types of types of technologies have emerged in order for different groups to be able to use them to promote democracy and to promote human rights.”

Smartphone-based social media such as Twitter, Facebook, YouTube and blogs played a critical role in extending the reach of opposition messages, which was validated by the University of Washington’s Project on Information Technology and Political Islam which assembled and analyzed data from more than 3 million tweets, gigabytes of YouTube content and thousands of blog posts about Tunisia and Egypt prior to the crisis in each country.

Who should read this?

Maria Otero says the State Department team sees this report as a “way of providing credible thoughtful, analytical information to all of those people around the world, whether it is non-governmental organizations, universities, other governments who are specifically looking at this issue.”

But in addition to serving scholars, reporters and analysts looking at the past, Otero says the State Department uses these reports as a source of information for present and future U.S. policy making, and sees them as a way activists and policy developers in this and other countries can help their own governments identify and decrease whatever abuses may exist, while at the same time increasing their own capacity to protect and to address the issues of human rights in their own countries.

It shows that there’s nothing wrong with reading about rights!

HOW CAN YOU OBTAIN a copy of the two-volume set of Country Reports on Human Rights Practices for 2010?

To find more U.S. government reports and publications about human rights reports,browse our online bookstore and search on “human rights”.

This entry was posted on Wednesday, August 15th, 2012 at 3:49 pm and is filed under Congress, Department of State, Foreign Relations, Human Rights, Middle East, U.S. Department of State. You can follow any responses to this entry through the RSS 2.0 feed. You can leave a response, or trackback from your own site.