School safety by the numbers

School safety is a concern. The recent school shooting at the public high school in Chardon, Ohio, reminds us that any school is susceptible to violence and tragedy. Indicators of School Crime and Safety: 2010, a publication by the Department of Education and Department of Justice, thoroughly examines the various indicators that threaten the safety of our nation’s schools.

The information and data in this report was collected through surveys conducted from 2007-2009. While this report is regularly published to help policymakers and schools develop ways to keeps schools safe and prevent crime and violence, it makes for an interesting read given recent events.

The report identifies 21 indicators that threaten the safety of schools. The indicators encompass a variety of problems like victimization, bullying, injury, fights, use of drugs and alcohol and weapons possession. Charts and graphs illustrate the data collected about each of the problems with breakdowns by age, ethnicity, gender, public versus private school, and urban versus rural school location. 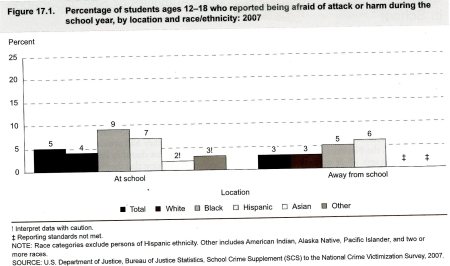 There are also comparisons for some indicators between being at school and outside of school.

Who’s carrying? For example, the above graph from the book shows the percentage of high school students who carried a weapon on and off school property at least once in the last 30 days. The highest weapon-carrying groups were American Indians, Pacific Islanders and White students, with Asian and Black students as the lowest groups. (CLICK ON IMAGE TO ENLARGE.)

The content is organized well with a brief explanation about each indicators followed by the data depicted through charts and graphs making for easy navigation if there is a specific topic you are interested in.

Some interesting findings during the 2007-2008 school year:

It is difficult to analyze these statistics and determine whether or not schools are safe. From scanning the various line graphs, it is easy to notice there has been a decline over the years from the mid-1990s to 2009 regarding most of the indicators. Hopefully, this data is used to improve and strengthen the safety of schools. As our country was reminded on February 27 in Chardon, Ohio, any school is at risk and we must be steadfast in the effort to reduce the risks that leads to tragedy.

What measures are in place to keep your child safe at school? This chart from the book shows what school security measures have been put in place overall since 1999, the year of the Columbine High School in Littleton, Colorado. While all measures increased since 1999, many have dropped from a former high rate in 2003-5, such as use of security guards, metal detectors, locker checks or visible student ID badges. The only measures that have consistently grown over the years are: use of security cameras, instituting a code of student conduct, locked entrance and exit doors during the day, and a requirement that visitors to the school sign in. (CLICK ON IMAGE TO ENLARGE.)

HOW DO I OBTAIN THIS “Indicators of School Crime and Safety: 2010” BOOK?

This entry was posted on Friday, March 9th, 2012 at 11:39 am and is filed under Department of Education, Department of Justice. You can follow any responses to this entry through the RSS 2.0 feed. You can leave a response, or trackback from your own site.

9 Responses to School safety by the numbers