The Underground Railroad Leaves its Tracks in History

Last week during National Black History Month, ground was broken on the National Mall in Washington, DC, for what will become the National Museum of African American History and Culture. In his remarks at the ceremony, President Obama mentioned that he wanted his daughters to see the famous African Americans like Harriet Tubman not as larger-than-life characters, but as inspiration of “how ordinary Americans can do extraordinary things.”

Image: This original photo of Harriet Tubman in the handbook lists the many roles she played in addition to being a “conductor” on the Underground Railroad, including nurse, spy and scout for the Union army during the Civil War. Her quote: “I looked at my hands to see if I was the same person now I was free. There was such a glory over everything… I felt like I was in heaven.” Source: The Underground Railroad: Official National Park Handbook.

One of the most dramatic areas of African American history is the story of the fight against slavery and the profile in courage represented by the ordinary people who did extraordinary things while participating in the Underground Railroad.

The National Park Service (NPS) has produced a number of exemplary publications about it, with three of them available today from the U.S. Government Bookstore, including the

That these items are not your typical guidebooks about a single historic site is due to the fact that the Underground Railroad itself is not a typical American national park.

Back in 1990, Congress instructed the National Park Service to perform a special resource study of the Underground Railroad, its routes and operations in order to preserve and interpret this aspect of United States history.

Following the study, the National Park Service was mandated by Public Law 105-203 in 1998 (you can read the law on GPO’s FDSys site) to commemorate and preserve this history through a new National Underground Railroad Network to Freedom Program to “educate the public about the importance of the Underground Railroad in the eradication of slavery, its relevance in fostering the spirit of racial harmony and national reconciliation, and the evolution of our national civil rights movement.”

What was the Underground Railroad? 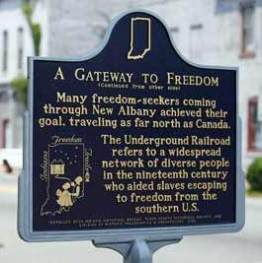 What was called the Underground Railroad was neither “underground” nor a “railroad,” but was instead a loose network of aid and assistance by antislavery sympathizers and freed blacks across the country that may have helped as many as one hundred thousand enslaved persons escape their bondage from before the American Revolution through the Civil War.

Describing one of the most significant internal resistance movements ever, the National Park Service said in a 1996 press release that:

The Underground Railroad was perhaps the most dramatic protest against human bondage in United States history.  It was a clandestine operation that began during colonial times, grew as part of the organized abolitionist movement, and reached a peak between 1830 and 1865. The story is filled with excitement and triumph as well as tragedy –-individual heroism and sacrifice as well as cooperation to help enslaved people reach freedom.

Where did the term “Underground Railroad” come from? 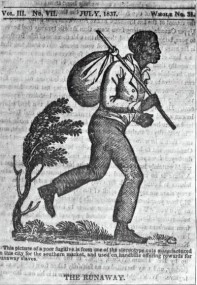 Historians cannot confirm the origins of the name, but one of the stories reported by the Park Service has the term coming out of Washington, DC, in 1839, when a recaptured fugitive slave allegedly claimed under torture that his escape plan instructions were to send him north, where “the railroad ran underground all the way to Boston.” However it came about, the term was widely in use by 1840, and is often shortened to “UGRR” by “those in the know.”

Image: An 1837 newspaper ad about a runaway slave from the book “The Underground Railroad from Slavery to Freedom” By Wilbur Henry Siebert, 1898.

Another byproduct of the UGRR special resource study was that the National Park Service carried out an analysis of slavery and abolitionism and identified the primary escape routes used on the UGRR.

The map below is included in the Underground Railroad: Official Map and Guide, produced by the National Park Service Cartographic staff at Harpers Ferry Center, shows the general direction of escape routes. Contrary to popular belief, Canada was not the only destination for freedom-seeking slaves–since some fled to Mexico, Florida and the Caribbean– but it was the primary destination as the efforts to catch fugitives increased. 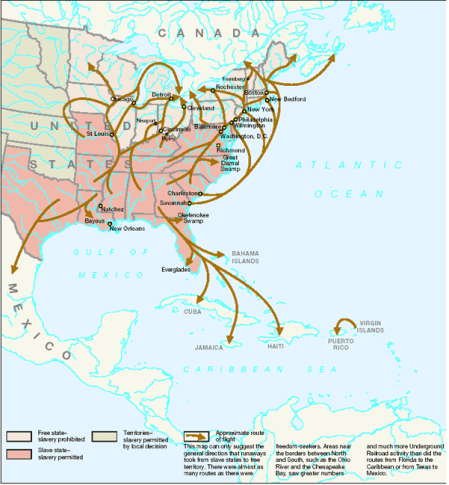 Additional outputs of the resource study and the subsequent research are the following three excellent Underground Railroad publications from the National Park Service.

The first book in our trio of publications is the Underground Railroad: Official National Park Handbook. It is comprised of a series of fascinating articles by top Underground Railroad historians that weave together a thorough view of the amazing stories behind the legend, illustrated with many drawings, court records, letters, paintings, photos, and other pictorial representations that help make this history come alive for the reader.

The handbook is broken into 3 major sections and 5 chapters: 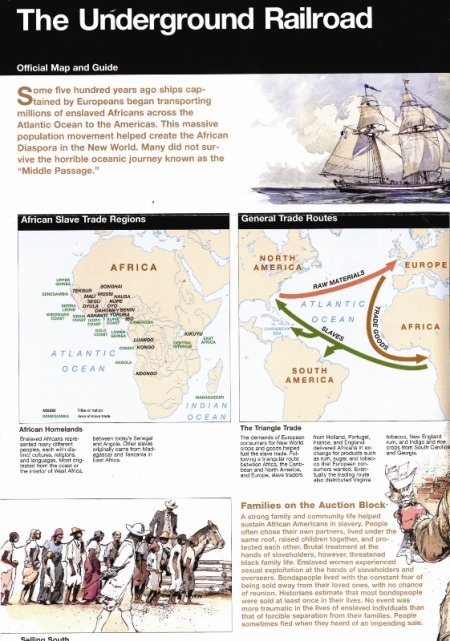 This map and guide includes drawings, blurbs, maps and chronologies about different aspects of the slave trade and the Underground Railroad.

Included in this fold-out map and guide are the escape routes map shown earlier, vignettes of key figures from key “conductors” on the Railroad to abolitionists, and even a short glossary of terms related to the UGRR.

The final item in our trio of publications is the Discovering the Underground Railroad: Junior Ranger Activity Book.

Many National Parks offer visitors the opportunity to join the National Park Service Family as Junior Rangers. Interested students complete a series of activities during their park visit, share their answers with a park ranger, and receive an official Junior Ranger badge or patch and Junior Ranger certificate.

Since there is no one national park site for the Underground Railroad, the National Park Service came up with a different process with this activity book. Aspiring Underground Railroad Junior Rangers have to complete different numbers of activities in the book pertaining to their particular age level, then send the completed booklet in to the National Park Service’s Omaha office. There, “a ranger will go over your answers and then return your booklet along with an official Junior Ranger Badge for your efforts.”

This fun booklet includes activities appropriate from ages 5 to 10 and older, from word finders and mazes to essays and historical fact matching.

How can you get these Underground Railroad publications?

This entry was posted on Monday, February 27th, 2012 at 2:01 pm and is filed under Congress, National Park Service. You can follow any responses to this entry through the RSS 2.0 feed. You can leave a response, or trackback from your own site.

34 Responses to The Underground Railroad Leaves its Tracks in History