Space Exploration and the Mind 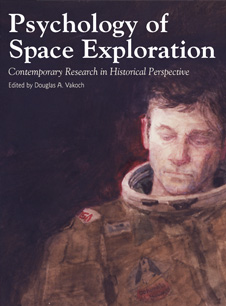 Many years ago I read “Ideas Die Hard,” a memorable story (at least to me) by Isaac Asimov. In the story, a crew of astronauts is on a flight to the moon under very tense circumstances. They go too far and see the dark side of the moon. SPOILER AHEAD: When they view the dark side, it’s a gigantic wood-and-paper stage set, the sight of which causes the crew to have a collective mental breakdown. At the end of the story, it’s revealed that the flight was a simulation and the simulator went just a bit further than intended. I think the story has stayed with me because it addresses the psychological dimensions of space exploration – an aspect I haven’t really seen addressed in news accounts or books.

NASA has filled this gap quite nicely with Psychology of Space Exploration, an engrossing new collection of articles on this theme. After an initial focus on the psychological effects of space travel, for many years the American space program paid only minimal attention to them, perhaps because the military background of the astronauts militated against what they perceived as the possibly career-retarding discussions of such matters. Interestingly, theSoviet Union paid much more attention to the psychological health of its cosmonauts during the same period. These days, however, NASA is more cognizant of the importance of mood, morale, the psychological effects of weightlessness, and other mind-body issues.

As a history buff, I was intrigued to read about the comparison of voyages in space to the epic journeys of Arctic explorers in the late 19th and early 20th centuries. Even now, wintering over in Antarctica is a kind of model of the prolonged stays in close quarters that characterize the International Space Station.

In a section on the interplay of astronauts from different countries working together, I was amused to learn that Soviet cosmonauts were not totally enthralled the space cuisine enjoyed by a French counterpart: “one of them later expressed his relief at going back to black bread and borscht after a menu of canned French delicacies, including compote of pigeon with dates and dried raisins, duck with artichokes, boeuf bourguignon, and more.”

Another fascinating essay described a space flight simulation experience in which people who knew that they were not really in space still got great enjoyment from their “trip.” It sounded so interesting that I was ready to sign up myself. Also, the special effects sound much better than those in Isaac Asimov’s story!

I really enjoyed reading Psychology of Space Exploration – I had no idea of the range of psychological issues that can crop up in space travel and the ways in which NASA has tackled them. Space buffs and students of the human mind will find much to ponder in this book. You can read it here, get your own copy, or find it in a library.

This entry was posted on Tuesday, September 13th, 2011 at 9:56 am and is filed under NASA. You can follow any responses to this entry through the RSS 2.0 feed. You can leave a response, or trackback from your own site.

18 Responses to Space Exploration and the Mind